In tonight's all-new episode of Syfy's Wynonna Earp, "Forever Mine Nevermind," Wynonna (Melanie Scrofano) decides that she wants to break the third seal herself to bring Clootie back and stop the Earp Curse once and for all, but to do so she needs Doc, played by Tim Rozon, to give her his ring. She knows the ring keeps Holliday immortal, but she's not willing to take no for an answer.

Earlier in the week Tim Rozon spoke to SciFi Vision in an exclusive interview about working on the episode, his character's motivations, and more. 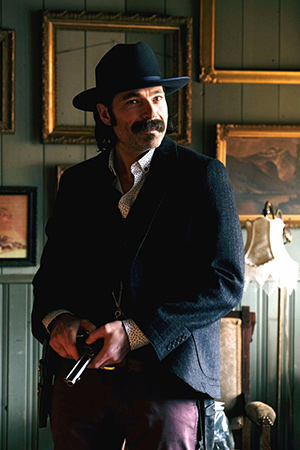 Before we get to this week's episode, can you talk about 2.08 and filming scenes with Bobo (Michael Eklund), again, particularly the scene in the well?

Well first of all, I was super happy to get to work with Michael Eklund again. He’s one of my favorite actors to work with. Equally as fun, he’s like Mel. He’s so invested in that character, and it was great, because we kind of flipped it. Doc was really mean to the Bobo character this time around, in the flashback, which was great, because it kind of built up for why they hated each other later in the future.

Paolo Barzman was directing, who’s one of my favorite directors. He’s kind of our main director. He did the pilot; he’s done more episodes than anyone, and he just really knows this story back to front. So, getting to shoot in the well and the way he did it, I don’t know the final product; I don’t know how [much they kept in], but I remember breaking down pretty hard in that well. So, it was not fun emotionally to go back and be that drained, because I was pretty freaked out, and Paolo lets you go pretty hard if you want. Of course, they cut everything down to something else, so I don’t know what we’ll end up seeing.

Before we got into 2.09 and the ring, first, in the one scene in 2.07, well before Doc takes off the ring, he's coughing. Is that foreshadowing that he's going to be sick again? Is there anything to that?

Because for anybody who doesn't know, Doc Holliday died of tuberculosis, which is a lung disease. So, for him to be coughing, obviously it would mean something now or some sort of foreshadowing, and we just took away his immortality, making him mortal, and they have me coughing, so is Doc's demise in the near future? I can't give away too much before we get through to the end of the season, but the coughing per se, I don't know how much we dealt with it again.

It was before he took the ring off, that's why I wasn't sure.

Way, way before I took the ring off, and then now the ring is off. I remember asking about it. I didn't get an answer to it, so I can't give you one, and I don't want to spoil if anything's going to happen or not before the end of the season regarding it, but I never got the answer that you're looking for, so I cannot answer that.

At least now, though, there are doctors that can deal with it better. 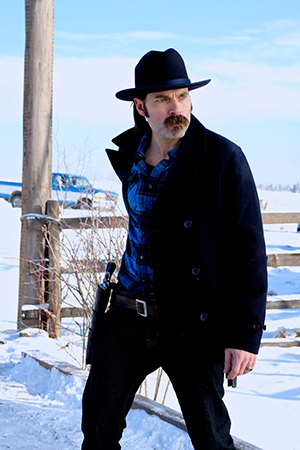 Now 2.09. I want to get to the main part of the episode, which is the ring, but first, do you think Doc knows that Rosita (Tamara Duarte) is a revenant?

I think Doc's known the entire time. I think Doc and Rosita have had a history from day one. That's one of the reasons. I think that's why they have a relationship together, and Rosita trusts Doc, because she knows that he's known all along.

I mean, I think Doc has no problems keeping people's secrets, even if it's something like that. I mean, he can see past that, right? Wynonna's the one who kills revenants, not Doc. That's not his purpose in Purgatory.

Ok, back to the ring. After watching the end of 2.08 and hearing Bobo say that Doc was refusing to give up immortality, it made me curious; did Doc just have to take off the ring to become mortal again? Was it really that simple?

Clootie cursed the ring, so without that ring, he’ll start to grow old.

It just seems really tragic to me, because all that time he was in the well, possibly all he had to do was take off the ring. Do you think he was aware of it the whole time he was suffering, or didn't think about it, or was he just that focused on revenge that he was willing to wait it out?

It's a great question. This was my question; I asked this question to Emily. From what I've been told, think of the well more as like caverns underneath the ground, so he had more space than say just the circumference of the bottom of a well. It went deep, and he had lots of places to kind of roam and whatever.

Not that I'm saying it was fun, [laughs] but it wasn't just that one spot that he was kind of sitting in for 130 years. So, he was moving around a bit. Because I said, "If you were just in the one spot, you would just take the ring off."

Yeah, that's exactly what I was wondering.

I guess too, taking off the ring makes him mortal; it doesn't kill him, so he'd still probably suffer for a long time dying naturally unless he found a way to kill himself. 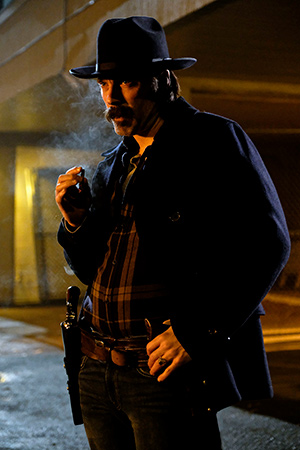 He would have to starve to death I guess.

Yeah, so there could still be suffering involved.

Right. Now what I'm not sure though, is if the ring, the seal, has to be broken for him to lose his immortality, or does he just not have to possess it?

Ooh, I hadn't even thought about that.

Now in this week's episode, Wynonna wants the ring. Can you talk about his thoughts then?

I was very conflicted during that time, because when you first read it, I was like, "Wynonna’s being really hard on Doc here," when I first got the scripts. And I guess she has her reasons for wanting to take it. She wants to save her family, but at the same time, it’s going to kill my character [eventually].

But then, I love the fact that Doc’s going to be a man, just a regular man. And the reason I love that he’s going to be just a regular man, is because then I can really see him and Wynonna together. If not, it’s almost too sad anyway, because he’s just going to keep living and will lose her anyway. And I think Doc, he’s got this romantic idea. He’s in love with Wynonna Earp, and he’d love to grow old and die with Wynonna by his side. If he still was immortal or couldn’t grow old, or whatever the term is for that, then he wouldn’t be able to do that.

...[Also] the thing that I loved about that scene, is that both characters, Wynonna and Doc, are so selfish in that scene, that who's right is really hard to say, because Wynonna wants the ring so she can break the spell so she can bring in the final thing to end the curse of her family, but by doing this, Doc's going to lose his immortality, but who's to say who's right or who's mission is more important?

Doc was angry and upset about the ring, but then towards the end, Wynonna said they would do it together, and he seemed to accept that. Did he really accept it? Will they still fight about it, or is he okay with it as long as they do it together?

I think he's accepted it. I think so. He's put up his fight for as long as he could. I think Doc's kind of scared; he's always been kind of frightened of death. It's something that has evaded him longer than anybody else. It's the one thing that he's been able to keep off forever. He's had this immortality, and he's become dependent on it, and I do not think he would have given it up for anybody else other than Wynonna. I do think that his feelings for Wynonna are stronger than they've ever been. Whether or not he'll admit them, I do believe that's the main reason, and I think that he gives up his immortality for her in the end. So, I think she's the only one that could have made him make that choice. I think it was a hard choice for him to do, but like I said, I think he did it for her.

At the end of the scene she says "our baby" to him. When she says that, does she literally mean it's his, or does she mean it more like when she said to Waverly it was their baby? To me it was unclear, but maybe it was supposed to be.

Hmm. I actually can't remember that, so I don't want to answer that question until I know for sure. I don't know. 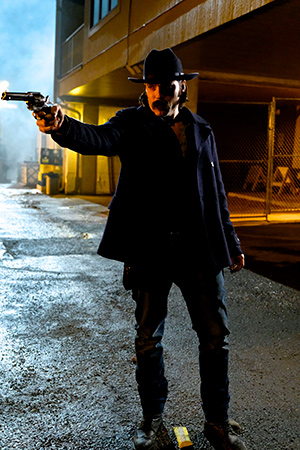 I also wanted to ask, in the episode we have the painting and the doll. Are we just going to see different forces of evil trying to get the seal, or is that specific evil going to come back? I didn't know if it was a one episode deal or not.

I think that was the bad for that episode in particular. I think now we're at that point in Purgatory, the closer and closer we get to bringing out the big bad, which is Clootie's husband. We've established at this point that Clootie's original husband is the big big bad, and you've got the Widows, and you've got [other things] in Purgatory. Let's just call them the bad: the demons, the revenants, everything, because there're more than just revenants this year, that's what we've learned is going on in Purgatory. In all honesty, we haven't dealt with too many revenants at all so far this year, and now it's the painting thing and the guy who sold the painting. What's his story? There was Juan Carlos and the firemen and their deal with the other stuff. They're not really dealing with revenants per se; they're keeping the Ghost River Triangle safe from all kinds of stuff. So, I think for this specific episode that was one specific bad, and their purpose was to get the seal.

...Also, one quick thing so everybody knows. The best part about 2.09 is Beau Smith's Stan Lee moment; he has a cameo. People have to keep their eyes out for the Beau Smith cameo. When I walk into the shop to buy the painting, we pass each other at the door. Beau has a moment. It's kind of cool that the creator of the show who created the characters is actually in the episode.

**Be sure to check out part one of this interview to hear more from Tim Rozon!**

Also, check out our interview with Rozon at the beginning of our podcast, Fandom Access, from Tuesday.

Blu-ray Review: Emma is a Charming and Amusing Update on a Classic
Tuesday, 19 May 2020
More Articles...