Upon arriving, it's apparent something is very wrong at the dilapidated facility. Abby, who ends up stranded, struggles to get information from the caretaker/repairman, Robinson (Dominic Monaghan), who seems to be harboring some dark secrets, while trying to find the missing lead scientist, Zek (Tom Sizemore), who has disappeared. 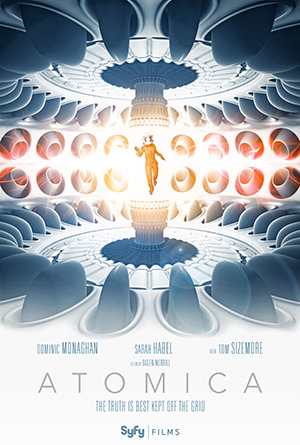 Abby struggles to work with Robinson to fix the station, while she starts to question his sanity as more truths are uncovered.

I really didn't know what to expect going into the film, as most Syfy films I have seen have their own campy style, but Atomica is nothing like that, and I was pleasantly surprised. Merrill used the perfect location of a missile silo as the power plant. The sets and atmosphere really worked to add an appropriate isolated feel to the film. The open spaces and style really helped sell the story, as did the smaller sets that added to a claustrophobic feeling at times.

The script itself, written by Kevin Burke, Fred Fernandez-Armesto, and Adam Gyngell, was ambitious, and for the most part it worked. The film did move a little slow towards the beginning, but it picked up pretty quickly and was able to pull me into the narrative. 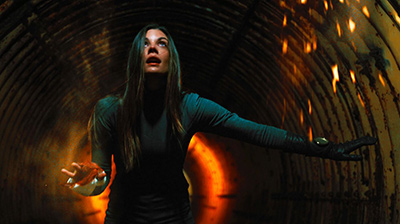 While the film does have some action, it’s more of a character study at times. The main cast consists of only three, but Habel, Monaghan, and Sizemore had no trouble holding their own, and having such a small cast added to the intensity.

Monaghan especially stood out as the creepy repairman. I went back and forth on what his intentions were, and whether he could be trusted or not.

The film also has an overtone of environmental issues, but isn't bogged down by it.

All in all, Atomica is an engaging film. It has an enjoyable mystery that will keep you guessing, and has an end that will stay with you. The film overall I found entertaining and thought provoking.