Tonight Syfy airs the fifth installment of its movie franchise, Sharknado: Global Swarming. This time the storms go global as the sharknados move from country to country.

Fin Shepard (Ian Ziering), his mostly bionic wife April (Tara Reid), and their youngest son, Gil (Billy Barrett), travel to London to help stop some sharknados from wreaking havoc. While there, Gil is pulled up into the center of the traveling 'nado, and his family, along with Nova (Cassie Scerbo), race across the world, from Stonehenge, to Rio, to Rome, and beyond, to get him back.

As always, the film boasts a bunch of cameos from the likes of Clay Aiken, Chris Kattan, Fabio, Tony Hawk, and many more, as well as references to a lot of films. 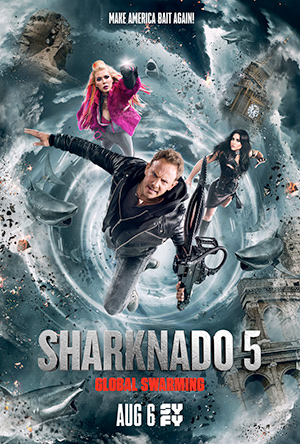 The fifth installment ups the anti and tries to outdo its predecessors with even bigger sharknados and more mayhem.

Usually I greatly enjoy these hokey films, but this time not as much. While the movie did pick up in the second half, the first part fell flat for me. I feel like the writers tried too hard to make it bigger than the last, and parts of it were so ridiculous that they weren't funny anymore, particularly with the character of April. I wonder if it's just that there have been so many that it starts to get a little stale.

That's not to say it didn't have it's moments. Some of the wackiness was a lot of fun, and it was still worth the time.

The other thing is, I'm guessing it's better on live viewing. For me, part of the fun has always been watching it and tweeting live, so I likely will like it more on second viewing.

I do suggest you tune in to the movie, especially live; it still will be a fun experience, even if just to attempt to spot the cameos. Be sure to tune in tonight to Syfy for Sharknado 5: Global Swarming.
Twitter
BotonSocial por: SocialEmpresa
Category: TV Reviews & Recaps