Tomorrow, the new six-part series, Good Omens, based on the novel Good Omens: The Nice and Accurate Prophecies of Agnes Nutter, Witch by Terry Pratchett and Neil Gaiman, comes to Amazon Prime. The screenplay was written by Gaiman, and the show was directed by Douglas Mackinnon.

The series stars David Tennant as the demon Crowley, once called “Crawly” and the snake who originally tempted Eve in the Garden of Eden, and Michael Sheen, the angel Aziraphale, original guard of the eastern gates of paradise, as unlikely friends, who after being used to all their time spent on Earth, want to stop the rise of the antichrist and the final battle between Heaven and Hell. 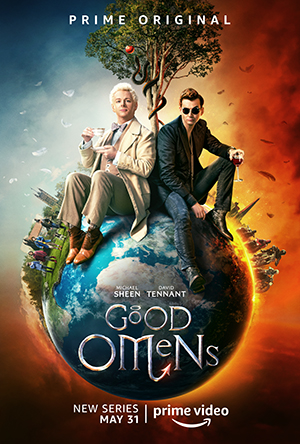 When Crowley hands off the baby son of Satan to nuns at a convent, there is a mix-up and the child is given to the wrong family, which causes all kinds of problems.

The representatives of Heaven and Hell try to work together to stop the end of the world under the noses of their respective bosses, who are just interested in being on the winning side of the war.

During the way they are helped by other key players such as Anathema Device (Adria Arjona), Newton Pulsifer (Jack Whitehall) and others as they worry about not only the child, Adam (Sam Taylor Buck), as he comes into his powers, but also about stopping the Four Horsemen of the Apocalypse.

The series also features Frances McDormand as the voice of God and Benedict Cumberbatch as Satan.

Having never read the book, I wasn’t sure what to expect with Good Omens. From the trailers it seemed like a fun show that didn’t take itself too seriously. In reality, the series is often wacky, but also has a fantastic story at the heart of it. It is so many things rolled into one.

In a recent interview (coming soon) with SciFi Vision, Douglas Mackinnon described the show as having its own tone and being made up of multiple genres, and that’s a good way to describe it, and also a great thing. The show doesn’t adhere to a lot of the normal structure of television and tells the story in a unique way. 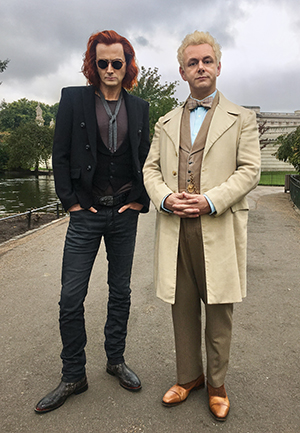 At first, when I realized there was a narrator (the voice of God), I wasn’t sure that was a good thing, as that’s something I often find irritating. However, here, it really works. The story is epic and spans thousands of years, and it was a smart way to break it up and also explain some things that could never have fully played out across only six episodes.

The script itself is brilliant. Just the flow and overall vision kept me glued to the screen. It was also kept fresh by not being completely linear.

Also, each character is interesting in their own and often quirky way, including the supporting characters. The show boasts quite an array of stars in the large ensemble cast. I could easily picture any one of them having their own spinoff series.

Sheen worked really well in his role as the jovial angel. He seemed right at home in the role.

Tennant was the perfect Crowley and embodied the demon traits when he needed to, but also brought an energetic flair to him when he was doing things that were perhaps not so evil. It was also hilarious when he would realize that he did or said something positive and would react to it. 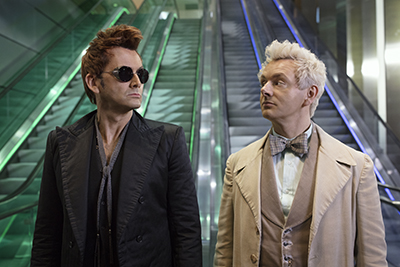 Most notably, however, the two of them together had excellent and authentic chemistry. You could easily believe they were friends for thousands of years.

I also enjoyed Adria Arjona as Anathema Device and Jack Whitehall as Newton Pulsifer and their often eccentric interactions, and of course adding in Michael McKean as Pulsifer’s boss, Shadwell, and Miranda Richardson, as Shadwell's neighbor, Madame Tracy, only made it better.

Cumberbatch had an interesting and exceptional take on Satan as well, though I would have liked the character to have had more screen time.

I also really appreciated the look of the show. The style definitely fit with the strange ways the story shifted, and the character designs were superb and unique, from the depiction of the demons with reptiles on their heads to the varied designs of each of the Four Horsemen. 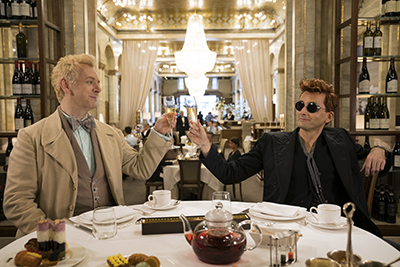 Overall, watching Good Omens was quite an enjoyable experience and one that is best watched in one or two sittings. I had a lot of fun and will likely be watching it again as well purchasing the book to compare the two. I definitely recommend this Amazon Prime series.
Twitter
BotonSocial por: SocialEmpresa
Category: TV Reviews & Recaps