Sunday, season five of Fear the Walking Dead premieres on AMC. The season starts where the last left off, with the group’s new plan of trying to find other survivors who are in need of help. However, doing good doesn’t always go according to plan, when in an effort to save a man named Logan (Matt Frewer), the plane that part of the group is traveling in crashes. Worse yet, the area may hold some new threats, including a different kind of danger posed by the walkers, as well as people who seem to be keen to keep others away. Not everyone is interested in the help the group offers. 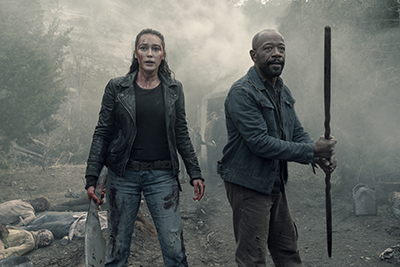 It was nice to have the group together during the start of the season. The show is often at it’s best when they work together.

The storylines so far, through the first four episodes that the press were given to review, were enjoyable and seem to suggest the show is heading in a more positive direction, which after so many character changes last season, I wasn’t sure of.

Lennie James and Alycia Debnam-Carey make a great team, and I liked a lot of their scenes together as Morgan helps Alicia as she struggles with her purpose in the wake of her losses.

As always, June (Jenna Elfman) and John Dorie (Garret Dillahunt) are cute together and often help to bring some light into a dark world. 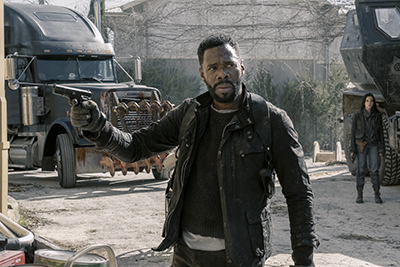 I also was really pleased with Colman Domingo as Strand this season. I really like the way his character is behaving as he struggles to make amends for some of his wrongs.

Domingo also serves as director of the third episode, “Humbug’s Gulch,” which is arguably the best of the four.

The season only gets better as it progresses, with the return of one character and the introduction of a new one, who fans will recognize

If the first four episodes are anything to go by, it’s going to be a successful season, and I’m curious to see where it goes next.
Twitter
BotonSocial por: SocialEmpresa
Category: TV Reviews & Recaps