Tonight, an all-new episode of Doctor Who, titled “Praxeus,” written by Pete McTighe and Chris Chibnall and directed by Jamie Stone, premieres on BBC America. In the episode there is trouble for the team on three continents when an astronaut goes missing that takes them to Hong Kong, birds start acting bizarre in Peru, and a naval officer washes up on a beach in Madagascar. The Doctor (Jodie Whittaker) and her companions, Yaz (Mandip Gill), Ryan (Tosin Cole), and Graham (Bradley Walsh), must split up to investigate the strange occurrences. Can they figure out how everything is connected and stop the threat in time to save Earth? 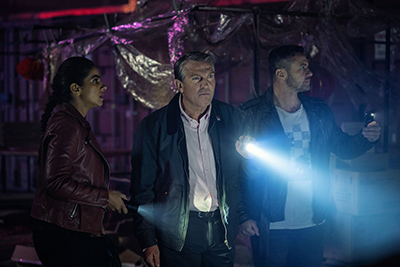 As what seems to be becoming the norm, in this episode, the team is once again split up for a good bit of it. It’s okay some episodes, but it’s starting to get disappointing that it is happening so often. I love all three characters (and the actors), but sometimes I think three companions is becoming a detriment. It’s not even about them not getting enough screen time, which they did have this episode. It’s the fact that there isn’t really time for bonding with the Doctor. The connection between the Doctor and his or her companions is always a strong one, but we don’t get to see it a lot with so many characters in play.

Regardless, everyone did have their moments this week. Ryan went off on his own to investigate the birds, while Yaz took it upon herself to follow up on a lead alone, which was terrific to see her bravely do. Graham tagged along with different characters at different times. He had great scenes, but if the characters are going to be more independent this season, I would like to see Graham step it up as well. There hasn’t been much opportunity for that.

I liked the guest characters brought in and their relationships as well. Each one was interesting. The only thing is, it felt like too many characters to focus on. It can already feel disjointed with three companions, and it just added too much to the mix. We didn’t really get enough time to bond with most of them as viewers.

As for the storyline, although perhaps incedentally timely, this week I found the plot to be a bit convoluted. It was enjoyable for an alien-of-the-week, and the main threat was interesting, but because the story was complex, there was a little too much exposition for me. I also felt the story was a bit preachy, once again telling us that we are destroying our planet. I don’t mind the episodes having messages and commenting on social issues and trying to making a statement about it, but we had the episode “Orphan 55” only three weeks ago, which was very similar in that regard. I will say though, at least there wasn't a long winded speech about our society's faults, that was a plus. 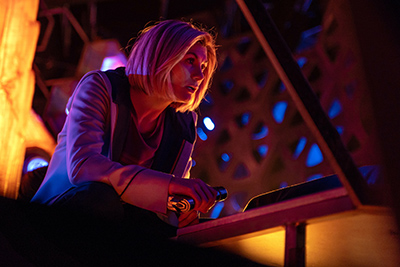 The locations, set, and overall look of the show, however, as usual were really fantastic. I was pleased with the look of the alien threat, though it did remind me a bit of Tzim-Sha at moments.

Overall, however, I still found the episode very enjoyable. Let’s be honest, last week’s epic episode is a hard act to follow. This week is fun, though a bit heavy, but it just doesn’t have the same impact or surprises the previous one did. It, however, was still by no means a bad episode. It was genuinely entertaining and a good episode, perhaps just not the best of the season.
Twitter
BotonSocial por: SocialEmpresa
Category: TV Reviews & Recaps