SciFi Vision | All Reviews | Television Reviews | Advance Review: The Irregulars, Not the Sherlock You Know

Advance Review: The Irregulars, Not the Sherlock You Know

The Irregulars, which premieres the 8-episode season tomorrow on Netflix, follows a group of rag-tag teens in Victorian London. Orphan Bea (Thaddeus Graham), who takes care of not only her sister, Jessie (Darci Shaw), who tries to cope with terrible nightmares and sleepwalking, but also struggles to find ways to keep them and their friends Billy (Jojo Macari) and Spike (McKell David) fed and a roof over their head, often stealing so they don’t go hungry.

In the pilot, sleepwalking causes Jessie to almost get hit by a carriage carrying Leopold (Harrison Osterfield), a rich and privileged sickly teen who knows not of the outside world. When Bea comes to save her sister, he is fascinated by her and later sneaks out of his home to befriend the teens.

Later visiting her sister’s grave, Bea meets Dr. John Watson (Royce Pierreson), who offers her money if she and her friends, knowing the streets and having access to the more unsavory parts of London, will help him track down someone for a case he’s working on with the police. Thus begins the partnership of the teens working for the mysterious doctor at 221b Baker Street, who they later discover has a partner, Sherlock Holmes (Henry Lloyd-Hughes), who Watson goes to lengths to keep them away from. 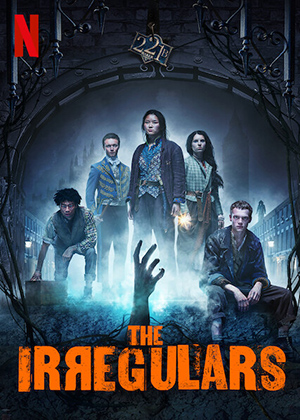 While tracking down a girl, the teens soon discover that there is something unexplained going on in the city, which as the season progresses, leads to a deeper mystery that has them questioning the doctor and snooping to find out more about the elusive Holmes.

Liking other stories about Sherlock Holmes and knowing it had a supernatural twist, I was really excited for the series, and I was not disappointed. Although the first episode moved a bit slow, after that it took off. While there were individual stories in some of the episodes, the series also had a bigger mystery and kept the threads woven throughout. I ended up watching the full season in only a couple days, as the more I watched, the more I wanted to know.

Although admittedly a bit of the Sherlock story was expected if you know his nature, the rest of the show was nothing like I expected. It was definitely a different tale, and other than a few quick glimpses, it didn’t even feature Holmes until well into the season. Watson was a completely different version than the character book and television fans are used to, which was surprising but refreshing. Although based on the two characters, the story really is about the teens. You do not have to be a fan of Sherlock Holmes or even know anything about the stories or characters to enjoy it.

Although about teens, I would definitely not classify this as a show for teenagers. The show got quite dark and gruesome at times and can definitely be watched by adults and young adults alike.

The locations of the series were well selected and the gritty atmosphere really added to the show, as did the period appropriate costumes.

Although I had never seen most of the cast before, they were all excellent and believable. The friendships between the teens were authentic.

The Irregulars is a fantastic supernatural drama series with an intriguing story that everyone should check out.
Twitter
BotonSocial por: SocialEmpresa
Category: TV Reviews & Recaps