Last October the digital press visited the set of Helix as part of the the Syfy Digital Press Tour. Part of the photos had been embargoed, but as such have now been released in time for the season finale.

The third Helix set location (see parts 1 & 2) was actually a real life research facility. We started off down to the underground base where the door to the facility was surrounded by fake snow. Director/executive producer Brad Turner picked up the cord to demonstrate how the characters hold on to it to move around outside. 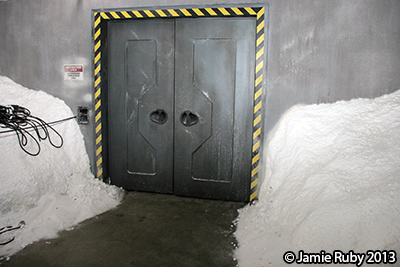 Entering the facility we passed quickly by a set that we didn't get a chance to explore, which is the blocked off section where we now know that Balleseros and Doreen broke into at the beginning of the season, which is also where Hatake found an infected Peter.

We also passed some costumes and directors chairs with the characters names. 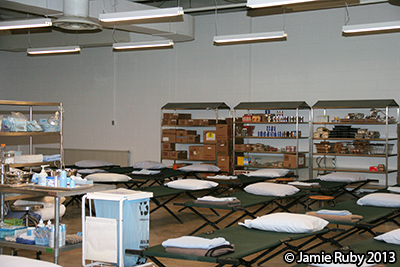 We next followed a man in a hazmat suit into what is called the cold room. It is a green screened room whose ground was covered with snow. There was also a fan blowing in the refrigerated room. Some of us stopped to get a photo with the man in front of the green screen.

Next we moved onto a sort of temporary sick bay filled with cots and also holding a tent with some lab equipent as well as shelves of medicine and food. 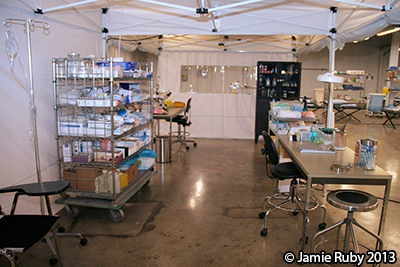 There were also a few appliances such as a refrigerator and microwave. Now that the show has aired everyone knows this is Level R where the possibly infected were locked up.

In front of the cots directors chairs were set up for all the cast as well as the creator Cameron Porsandeh. This is where the Q&A took place after the tour. 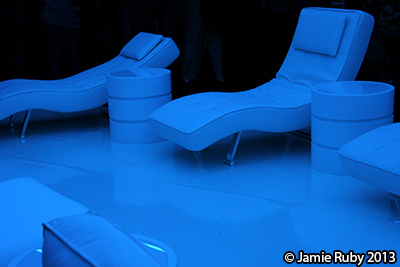 Upon leaving we walked past some more labs which I believe some are from Level R and the other looks to be Dr. Adrian's cryo lab on Level G. We also stopped in the room where they had done nuclear reactor experiments years before. We also got to see the cell where Balleseros was kept by Sutton as well as the sun room, where we were told those at the facility would go to get UV light treatments because of their lack of sunlight.

On the way out we also passed a couple lab maps which I made sure to take photos of.

You can view the gallery containing all of the things described here and all other parts of the press tour here. Stay tuned for photos of the Q&A.