On Friday, October 9th, the first press room at New York Comic Con I attended was for Mr. Robot and Colony on USA Network. Mr. Robot returns for season two in 2016. Following are videos with the cast and crew, as well as highlights from the interviews, and of course photographs. Information about the series can be found at the end. 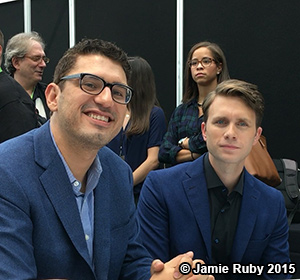 *  On the show being critical of
the capitalist system

*  Esmail on the writers always
trying to do the unexpected
and subvert expectations
(i.e. the villain not in
control)

*  Esmail on the deicision to delay airing the season finale

*  Esmail on season two being even darker than season one 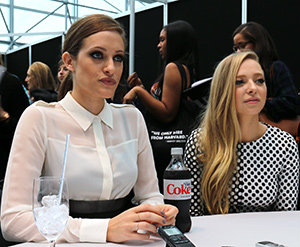 *  Chaikin on feeling more
confident in season two, yet
still being surprised

*  Doubleday on learning things
along with the character

*  On the two characters’
relationship with each other

*  Chaikin on learning to trust
herself and others on set

*  Doubleday on collaborating with Esmail during filming 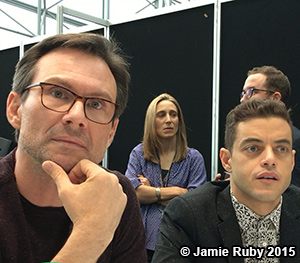 *  On the fanbase and social
media

*  On research into the culture and on playing hackers

*  On the idea of absorbing episodes rather than binge-watching them

*  Slater on continuity in the series


From the Press Release:

MR. ROBOT follows Elliot (Rami Malek, “The Pacific”), a young programmer who works as a cyber-security engineer by day and as a vigilante hacker by night.  Elliot finds himself at a crossroads when the mysterious leader (Christian Slater, “Nymphomaniac”) of an underground hacker group recruits him to destroy the firm he is paid to protect.  Compelled by his personal beliefs, Elliot struggles to resist the chance to take down the multinational CEOs he believes are running (and ruining) the world.  The series also stars Portia Doubleday (“Her”), Carly Chaikin (“Suburgatory”) and Martin Wallström (“Simple Simon”). MR. ROBOT will return for season two in 2016.
AdmirorGallery 5.2.0, author/s Vasiljevski & Kekeljevic.
Twitter
BotonSocial por: SocialEmpresa
Category: Special Events