On Saturday, October 10th, the second press room at New York Comic Con I attended, directly following its panel, was for The X-Files on FOX. The X-Files returns for season ten January 24, 2016. As SciFi Vision intends to cover the series extensively, I have transcribed the majority of each of the roundtable interviews.

Following is a transcript of some highlights from the interview with Kumail Nanjiani, followed by the video. Don't forget to check out the full photo gallery and other interviews from the press room, as well as highlights and photos from the panel and premiere. 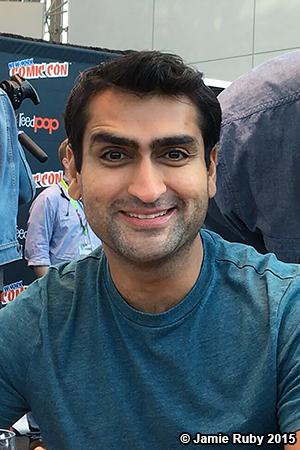 On how nervous he was moderating the panel

You know, I was nervous before it, but then I met David [Duchovny] when I was shooting the show, and I met Chris [Carter], and I'd emailed with Mitch [Pileggi], but when I met them they were so nice. Mitch and Chris were so nice and kind and warm, that they made me very, very comfortable. So actually, when I went out there, I was nervous here and there, like I would find myself stumbling over words and being like, 'I don't think I'm nervous, but like usually I don't stumble over words,' but, you know, it was just such a positive thing. Everybody's so excited to be there. There's kind of no wrong way to do it.

On a confusing fan question at the panel

Well I think what it was, is a lot of times people will like show off that they know the show, so I think that was a version of what he was doing. It was a version of - you know that Chris Farley sketch? You know, "And then that happened; that was awesome!" I think it was a version of that, but he was also trying to be like cool and cocky, and in a Dead Pool outfit. Yeah, so I don't know what the question was.

He was trying to sort of do that, but I think [with] The X-Files, so many shows have been influenced by the The X-Files, and Supernatural certainly seems to be one of them. So I think sometimes people want to show off. It's fine. I mean, how many times are you going to get to talk to these guys?

I believe so. I don't think they're retconning anything; I think what they're doing is, it seems to me, is that they've parroted down some. You know, it's nine seasons of a story, and things get - you know, there's just a lot of stuff. I think this one did a great job of sort of clearing some of that off and focusing on what's important, which is the conspiracy and aliens, and sort of just focusing on that. And I think it's going to be, yeah it is in continuity. 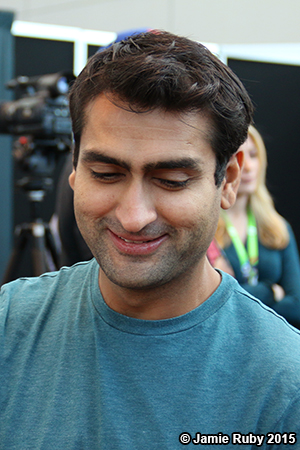 [crosstalk about not needing to know a lot of the mythology]

I mean, four of them are standalone, so you know, they don't have a reference anything.

So I heard that they were sort of split up, and that made sense to me. I just wanted to make sure that going in, it felt like a relationship that had been building for the last twenty some years.

On the idea of if his podcast is a natural progression of things like the official magazines, books, etc.

Oh what I'm doing? Doing a podcast and then getting to be on the show? It doesn't feel that natural. It feels kind of crazy. I mean honestly, I started the podcast last June, and then a year later, to be here talking about how it was being on the show, I mean, it's truly unbelievable. I mean, it's a dream coming true that I never even dared dreaming.

You know, I was a little kid in Pakistan watching the show, and now to be on it, it's hard for me to still talk about it. It feels kind of crazy. I feel very, very fortunate that they were kind enough to put me in, knowing I was such a huge fan of the show and knowing what it would mean to me. That's why they did it. I mean, they didn't have to. They wrote a part for me, because they were like "Oh this guy likes the show. Let's put him in and change his life forever." 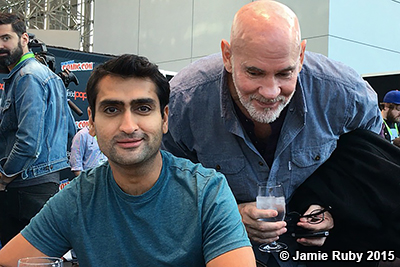 On his role in the series

I'm in one of the episodes. I'm in episode three, and I don't think I can say any more than that. It is a monster of the week episode; it's like a one off; it's not a mythology episode, and it is amazing. It's such a good episode. It's written and directed by Darin Morgan, who wrote my favorite episode, "Clyde Bruckman's Final Repose," so, you know, to work with one of my favorite writers of all time in something that he wrote for me, it just is unbelievable.

On what he found the most challenging about it

Not crying on set all the time. I was very, very nervous. You know, usually I've worked in stuff and I've sort of gotten to the point where I don't get too nervous anymore, but as soon as I found out, and I found out three months before, and so I didn't watch any X-Files for those three months, because I wanted it to be like just a normal show and not freak out.

And then I worked on the scenes, and I was like, "I'll be okay." And then when I landed, the transportation people picked me up, and they handed me folder, it had this poster as the cover, but instead of "I want to believe," it said my name on it. It said X-Files welcome folder.

And I freaked out, and I called my wife. I was like, "Hey Emily, you need to talk me down, because this random job is becoming The X-Files again. 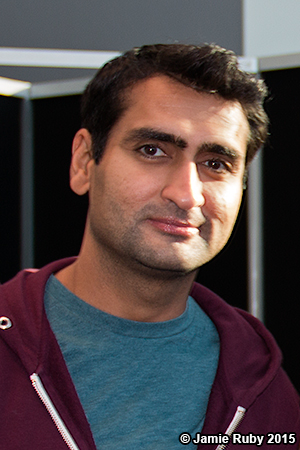 And then there was another moment on set, where Scully has a flashlight and a gun, and I was like, "Oh my God; I'm in this scene! I didn't just talk to David and Gillian; I talked to Mulder and Scully."

So it was very, very nerve wracking for me, but again David and Gillian were so wonderful that it was easy to squint and pretend that they were just normal people.

On why he thinks the show is still around

Well, I think what really works, is that it's not a show - a lot of sci-fi and stuff...

[crosstalk as Mitch Pileggi (Skinner) walks up behind him]

I mean, I think Walter Skinner is the character that really is the reason that...the show has stuck around; it's just such a lovable character.

And I think it's that, you know, a lot of sci-fi relies on like big special effects and stuff, and I think that this show, first of all, it holds up, because it's about the characters, and more than anything else, it's about the relationships. And I also think the way that they use special effects is very smart in that, you know, you don't see like bad 90s CGI taking you out of the moment. It's very subtle; it's a very quiet show in many ways for a big sci-fi show, and I think a lot of stuff it's talking about with, you know, paranoia government surveillance all that stuff, I mean, now more than ever, is when it's relevant. I think it's really going to resonate with people.