On Saturday, October 10th, the first press room at New York Comic Con I attended was for Shadowhunters on ABC Family. Shadowhunters,  which is based on The Mortal Instruments book series by Cassandra Clare, premieres January 12, 2016. Following is an exclusive video with the author and executive producer McG, as well as highlights from the interview, and of course photographs. Information about the series can be found at the end.

Note that while I was lucky enough to get press line for the press room, I only was able to stay for the very beginning due to another event, but after the video, I did get as many photos as I could at least. 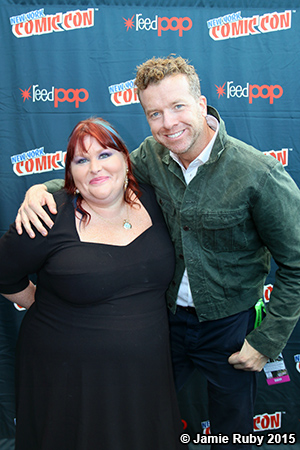 *  On Ed Decter adapting the
series from the book

*  On scenes Clare is looking
forward to seeing

*  On Alan Van Sprang as
Valentine

*  On Clare's favorite part of
the set - the institute

*  Clare on having an unlimited
mental budget


Also if you haven't already, check out some of the photos from around the con that include props and such from Shadowhunters as well as photos from the panel (coming soon).

From the Press Release:

Based on the bestselling young adult fantasy book series The Mortal Instruments by Cassandra Clare, Shadowhunters follows 18-year-old Clary Fray, who finds out on her birthday that she is not who she thinks she is but rather comes from a long line of Shadowhunters – human-angel hybrids who hunt down demons. When her mother, Jocelyn, is kidnapped, Clary is thrown into the world of demon hunting with mysterious Shadowhunter Jace and her best friend, Simon. Now living among faeries, warlocks, vampires and werewolves, Clary begins a journey of self-discovery as she learns more about her past and what her future may hold.