During the Fan Expo in Toronto, SciFi Vision attended the press room for Syfy's Defiance. The interviews were broken up into three sets of actors. Interview one consisted of Graham Greene, who plays Rafe McCawley, Jaime Murray, who plays Stahma Tarr, and Nicole Munoz, who plays Christie McCawley.

The actors of course did not reveal things about the new season, but they did talk about their experiences working on the series.

Here are some highlights and exclusive photos, and you can also watch a partial video of the interview below. 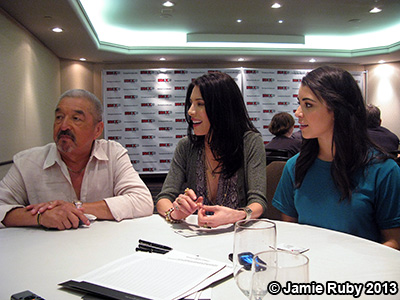 On their first time at Fan Expo -

Graham: I think it's great; it's amazing to see everybody dressed up.

Jaime: It feels like a really authentic group of people getting together to celebrate something they really love, and there's something really beautiful about that.

Graham: Back in the pioneering days, during the late 17, 16 hundreds, they had something called the "Rendezvous" where everybody would meet [together]. They'd live all over the country and then once a year they'd all get together and just eat and carry on for three or four days, and this is just like it, I guess a lot of people don't even know one another that come here.

Jaime: And as actors, it's hugely flattering, because it's like if we are part of what get these groups of people together, it's a beautiful thing to be a part of, that we actually inspire people to have a commonality that unites them. I mean, that's great, that's one reason to become an actor for sure.

On the importance of connecting with fans -

Nicole: I think it's very important, I mean, a huge part of your career...I've got Twitter, my favorite one is the Tumblr. 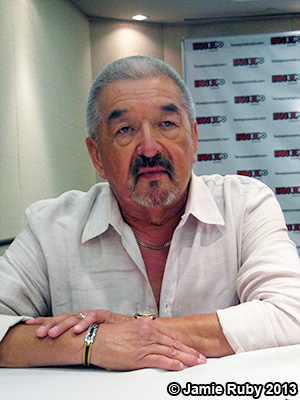 Graham: I wouldn't know a blog from a tweet from an email, I don't know.

Jaime: And yet he raps!...You know, I was actually initially quite scared of Twitter; I didn't really understand it. And Julie [Benz] had a presence on Twitter for years before I did, and she sat me down one day and set my account up for me. And I used to get really nervous about what I tweeted; I used to kind of get anxious. And now, it's just a like a conversation, and it's a real authentic transaction between the fanbase and me and, I don't know, but I feel like the people that follow me on Twitter have the same kind of snarky kind of sense of humor as I do, and you know, I recognize some of them on my feed, and it's cool.

Graham: Well, things evolve. Season one was a setup for everything, and then we sort of were still feeling out what we were doing; the writers were still feeling out what they were doing, and this season adds a little more substance to everybody's gravitas in the characters, and it shows where they are going to sit, but we don't know what's happening. Much like life, they don't tell us what's happening. It's all an experience to us so it keeps us on a certain edge of performance - we all sat and watched last year what we did, and this year now we can step on another stone on that path and be more secure about what we're doing, and actually help out the plot lines in any way that we can with our performances. 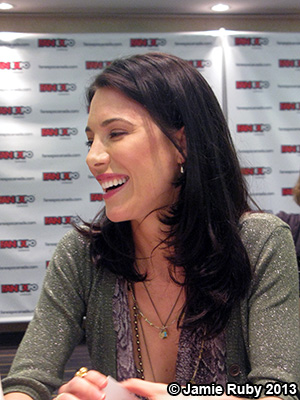 Jaime: Exactly. He just saw me looking pretty in the makeup with my white hair and my cute dresses and then when he saw the first season, he was like, "Awe, she's the queen of creepiness."

Graham: You know, the first time I saw Jaime dressed up she was sitting in the trailer and she had this outfit on with the hood up and I walked past her, and I was like, "Oh my God." And then the first thing I said to her was something like, "God, you look amazing; you are incredibly a vision sitting there." Then I started watching the first episodes, and at the end of the season I'm going "Ooh! She's creepy!"

Jaime: You know, a really wonderful thing about something this big, is you're dealing with really big themes, and then obviously I am playing another species, and the writers have got a huge array of cast to deal with, and the directors got decisions about visuals and how things are going to look. So what happens is it's so big that you actually have more opportunity to create, because all those people, sometimes on other jobs they'll be able to control everything, but when something's this big, you can't control everything. We can go to the director or producers or writers and suggest an idea and they're like, "Oh I'll have that," and they'll use that. And so I really feel as though this genre, and particularly this show, really fosters a high level of creativity, almost like in theater. It is a real production of everyone coming together, and that's a joy, and you see it with the costume designers, you see it on set, you know, the set designers and everything, everybody's really good at their job and they're bringing a lot, so it's great.

Graham: We're starting to get to the point now where we can just walk on set and go, "Yeah," there's really no discussion about what's going on, it just, "Yeah let's do this," and boom.

On their favorite parts of/locations on set -

Graham: I think just going to work every day, because we're off on a parking lot and all the trailers are there, but as soon as you walk down this little ramp into Defiance, it's... 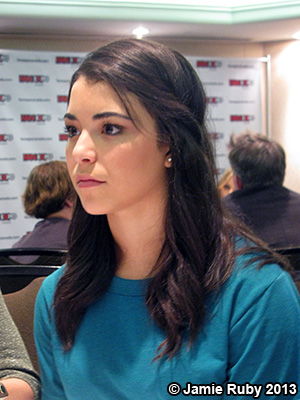 Nicole: They've just put so much detail you can actually walk through the streets of Defiance, so it really helps with our creative process.

Jaime: For me, it's super fun. It's such an integrate storyline, and yet I never feel as though I'm doing exposition. As an actor, you know, it's [your job] to kind of push plot along or tell the story. You know human beings don't really do that, or aliens, or whatever, but you know, but I always feel like I'm playing a character, and I'm playing a relationship, and that's a real joy between action and cut. It's so joyful, and I'm not saying ridiculous things because I'm trying to remind the audience about what happened last week, and that's really the skill of great writers, they're managing to give you this complex world without overloading us with boring crap that makes us want to shoot ourselves as actors.

Graham: Yeah, as performers, she's right, to be a step ahead and keep grabbing ahead and pulling on and lifting through it, rather than saying, "Last week on Defiance..."

Graham: Personally as an actor, I don't want to see - I don't want to have the luxury of knowing where my character's going. That's no fun. It's so fun, it's like getting a new set of something, a new set of [cutlery]. Every time they hand you a script you go, "Whoa, look at this," and you read it, and you run and sit in your favorite chair and you read through the script and then you go, "Wow, that gives you something to think about," instead of knowing. Nobody comes to us. 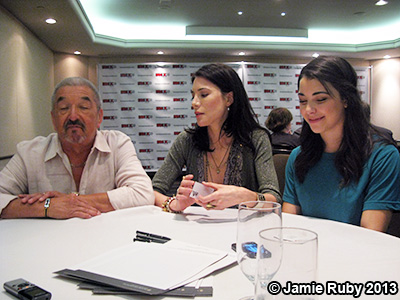 Jaime: If we know where our character's going, then we've kind of failed a little bit...We don't want the audience, or us, knowing what's going to happen as though it's to be expected and there's no surprise, but I'm always reading scripts for this and thinking, "Awe no, my character would never do that! Why is she doing that?" And then I'm like, "Ah, that must be good then." First of all I'm super invested in my character, and secondly, they are constantly surprising me.

Graham: Keeping us on our toes as to what we should be doing and shouldn't be doing.

Jaime: You know they always say that happiness is not a true test of character. It's nice; we all like happiness and joyful scenarios, but it's really trials and tribulations and trouble that really shows the full mettle of a character, and I think that on Defiance all of our characters are tested to their limits.

Don't forget to check out the rest of our exclusive photos from the Defiance press room (with many more coming soon)
Twitter
BotonSocial por: SocialEmpresa
Category: Interviews