On day two of SciFi Vision’s Midnight, Texas set visit on 9/13/18, reporters were given a behind the scenes set tour by new line producer Jeff Rafner, who manages the day-to-day happenings on set. Afterwards, Rafner talked to journalists a bit about the steps of putting together an episode during preproduction.

JEFF RAFNER: In prep on day one of shooting an episode, we have what we call a concept meeting where the writers and all the department heads talk about the big picture, what’s being looked for for that episode. That usually takes two or three hours.

And then after that, we then break up to individual department meetings. 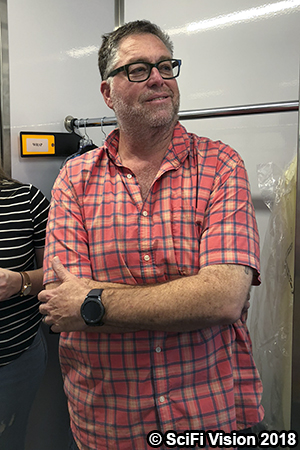 So, if we have a featured set that will require a bunch of specific special effects, that will require multiple departments to be in, we’ll have a meeting for that specific gag or thing that we’re putting together involving all the people that would be involved.

So, that goes through all the different days, and as we get to the end of prep, probably day six, we’ll have a tech scout, where everyone will get on a bus and go to whatever location we’re filming at, and we’ll all talk about what we’re going to film.

At that point, we come back and have a production meeting where we go through the script. Everyone asks questions collectively at the end, and then the last day we start shooting again.

And then rinse and repeat. It’s the same thing for the next episode, so that’s the process going through everything.

Do you guys do two episodes per block?

This year we did two two-block episodes, two two-episode blocks, one, and then all the rest of them were individual.

**Be sure to check out the rest of the coverage of the event, and stay tuned for much more, including the rest of the full individual interviews and more set photos, leading up to the premiere tonight.**
Twitter
BotonSocial por: SocialEmpresa
Category: Interviews