Tricia Helfer, who’s probably best known to science fiction fans as Number Six in Battlestar: Galactica, will be joining the cast of Syfy’s Van Helsing this season as Dracula. Her first episode will premiere November 8th.

She will also be guest starring in Shudder’s Network's Creepshow on October 17th as Lydia Layne.

Helfer recently talked to SciFI Vision in an exclusive interview about joining the cast of Van Helsing, what fans can expect of her female Dracula, working on Creepshow, and more. 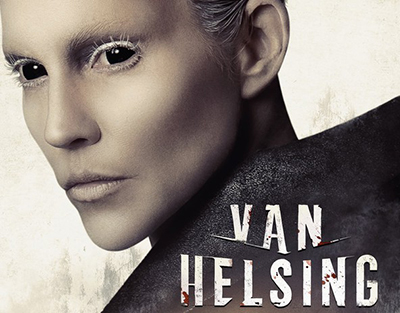 SCIFI VISION: Can you you start with talking about how you started working on the Van Helsing? Obviously, you've been with Syfy before. Did they tell you about it, or did you audition or -

TRICIA HELFER: It was one of the very nice circumstances where I got offered the role. I knew of the show, but I don't actually get to watch too much stuff. I should watch more. [laughs]

I liked the take on it. When they sent the script to me, I obviously had to do a bit of research on the show in terms of the tone and things like that, but I just liked the take on the character. And I mean, it's a little daunting to play Dracula for sure, but, you know, I just really liked their take on it.

And in having discussions with them, we seemed to be on kind of the same wavelength, and I thought it was a really fun and interesting opportunity for me. I was really excited for it.

Yeah, I don’t think there’s ever been, at least I've never heard of one anyway, but I don't think there's been a female Dracula before.

So, you said that you looked into Van Helsing, but did you look into any other vampire lore or about Dracula or anything like that to find out more?

You know, I did the whole Wikipedia thing, [laughs] or Google thing; that comes in very handy. I don't know what we would do without it, but, you know, with TV it all goes fairly fast once you get offered something, and then all of a sudden, you're filming. But I didn't go back in terms of watching other movies or whatever, because I didn't want to have it skew. Like I didn't want to watch Gary Oldman playing Dracula or whatever and then go, “Oh okay, so I have to do this,” or “I have to do that.” Van Helsing is a total reimagination of a timeless brand, so it has its own take on it, and I just wanted to kind of live in that world. But yes, of course I went and, you know, read about the original stories and the book.

Is there anywhere else you got inspiration from? I don’t necessarily mean something to do with vampires, but is there any part of like another character or, I don't know, something or someone you kind of thought of when you were creating her? Or did you just go completely from the script then?

Yeah, I really just went from the script.

A lot of it is establishing the look and talking with the producers and hair and makeup and wardrobe and the team. And Jonathan Scarfe was directing my first episode, who obviously plays Axel on the show. I had done an MOW, a Lifetime Movie, with him quite a few years ago, so I knew him as an actor. It was really great having him as the director of my first episode, because we already had a shorthand and a trust with each other from having played together in a movie and having had a good time filming. So, it was good to be able to discuss with him as well as on just a very base level of like, “Okay, so this is how I'm thinking, and this is what we're doing.”

And in my first episode, there was a grandness to the character in some ways of like, “I am Dracula!” or whatever, and I had said to Jonathan, “I feel like I want to make this smaller; I'm not speaking to a room full of people. It's just me in this dark garden with [a few characters.]” It felt more intimate.

And Jonathan was on board with that. It wasn't necessarily written intimate; it was written grander, so that was one way that I kind of looked at it like, just bring it and make it a little bit smaller.

Really, for me, a lot of it is playing on set on the day with the people in the scene. You know, working with Christopher [Heyerdahl] and having that kind of connection between the characters allowed it to still be powerful but be smaller.

You've seen it. [laughs] I haven’t seen it yet, so maybe you could tell me if it worked or not? I don't know.

Yeah, definitely. Although some of the special effects are missing. That’s the only thing. Some of it’s kind of funny, because of the stuff that's missing from the scenes, but other than that it worked well. [laughs] 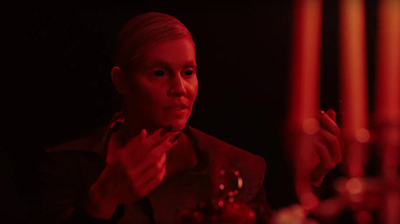 Oh, so you’ve seen an early version, not a finished version with all the visual effects. Yeah, those type of scenes can be hard to [laughs] watch when you don't have the smoke curling around and other effects.

Yeah. It was fun though. [laughs]

Can you talk about the makeup effects with Dracula?

When I first got the role, in my first talk to the hair and makeup team, they sent me images of what they were thinking, and it was exactly along the lines of what I was thinking. So, there was no arguing on that. We just we decided we wanted to go a little bit more androgynous and a little bit, not alien, but a little bit more creature than bombshell with long flowy hair and red lips, you know, femme fatale type of Dracula. I didn't want the first female Dracula to be some sexy vamp. Dracula is all powerful. She doesn't have to project; she doesn't have to add on anything.

So, we just wanted to strip away any of that. So, I'm whited out as per, you know, a vampire, and I just look a little creepy, which was fun, because it's easy to get into character. You know, I'm shooting something right now where I'm playing 1940s, and it’s amazing how much once you get the hair and makeup - you do one element and you're like, “this is weird,” but then you do all the elements combined, and it’s the last piece of the puzzle. You know, you start putting the costume on, and all of a sudden you start walking differently and talking differently.

It’s the same with Dracula. We slicked the hair back, and then I got all whited out, and I got the contours, and I got the black contacts in, and you just start kind of moving differently. So, it all kind of comes together that way and, you know, hopefully people like it. I just wanted to bring an element of fear obviously, power, to the character, and also just a little bit of fun, because at this point, she doesn't have an equal that she knows of, and so there's a sense freeness that comes with that. So, I wanted her to have an element of fun - not funny funny haha, [laughs] but an element of just control and freedom.

Let me quickly jump to Creep Show. The episode was funny - again, like you said, not exactly haha funny, but kind of a weird situation funny.

So, you’ve seen it as well.

Yeah, I've seen it. That one I assume was finished, as there was a lot of blood and viscera. Also, it looks like it was practical effects rather than digital, and it looks like that would be quite interesting to work with that. Can you kind of talk about it in that sense?

You know, that’s one thing about working with Greg Nicotero; he’s just a genius with makeup and effects wizardry. Greg is so passionate about what he does. It was so fun to work with him, because he's got a great energy and focus, but he really does like practical, as much as he can get. That’s where he comes from, makeup wizardry.

I haven't seen the finished episode, so I don't know how much has been added in terms of visual effects, but from my understanding, most of it is practical, which you don't get as much nowadays, because vis effects are at such a place that it’s probably easier and faster for them to just put it in visuals, you know, digitally, afterwards.

As an actor, I don't really like that, to be quite honest, because it takes away from what you're doing in the day. You're having to add on more imagination; it's like working green screen. You don't really have something that you're looking at; it's a lot harder. Like yes, the fake blood smells different than real blood and whatever, [laughs] but there's just an element to it.

In one place, there's this piece of a trophy coming out of Celia [Danielle Lyn]’s head, and it looks so disgusting and gross, that you're not really having to act that. [laughs] It's there, you know? 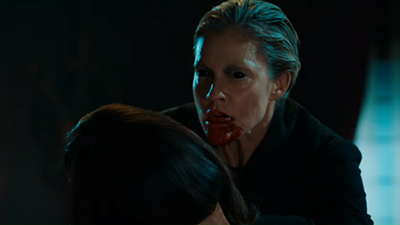 So, I prefer to use as much as you can of practical stuff, and that's one thing that Greg is just brilliant at.

So, it was fun to do, and it was a great team that we worked with, [Director] Roxanne Benjamin and Danielle Lynn, and we just had a lot of fun with it.
Twitter
BotonSocial por: SocialEmpresa
Category: Interviews