Tonight, AMC premiered an all-new episode of its hit series, The Walking Dead. In tonight’s episode, Negan (Jeffrey Dean Morgan) was let out of his cell to help fight off the massive zombie hordes headed towards Alexandria by Gabriel (Seth Gilliam), something that Aaron, played by Ross Marquand, was not happy about.

Happy or not, Aaron ended up having to rely on him after temporarily losing his sight from the hogweed, and Negan ended up saving his life.

Marquand recently talked to SciFi Vision about the episode, working with Morgan, dealing with the practical effects, and more.

SCIFI VISION: In the premiere, Aaron has a conversation with Michonne (Danai Gurira) and she's kind of chastising him, and he says that he doesn't want to play nice with the Whisperers, and she says something like, “Nice never got me anywhere, but smart did.” Is this the end of nice Aaron? Because he seems like perhaps he's itching for a fight. 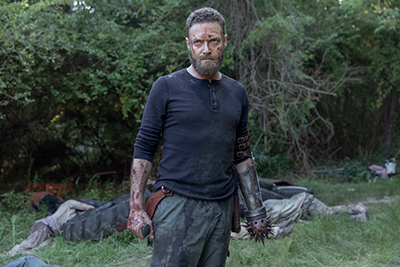 ROSS MARQUAND: Well, I don't know if he's itching for a fight as much as he is wanting to be proactive. He’s always been such a diplomatic nice guy, and while I feel like that’s his core programming, and that’s who he is as a person, I really believe that this is a turning point for him. After losing Eric (Jordan Woods-Robinson) in the battle of the Saviors and losing Jesus (Tom Payne)in the battle with the Whisperers, and all the countless friends that he’s lost in the ensuing battles, you know, Tara (Alann Masterson), Enid (Katelyn Nacon), and everyone he lost the end of last season, I think he's realizing that his nice guy diplomacy doesn't work anymore. It just doesn't work.

And in this crazy world, I mean, even though he was dealing with warlords in Africa during his time as an NGO before the apocalypse even began, you know, people were pointing guns in his face; he said that in the second episode of the introduction, but that was actually less crazy and more tenable than what he's dealing with now. What he's dealing with now is a threat that has no morality, no ethics, no way of reasoning with them. I think he realizes that Alpha (Samantha Mortons)'s violence and unreasonable nature has to be met with extreme violence, and that's the only way that they're able to solve the issue.

So, obviously, quite a lot happens in this episode with Negan and your character. He was kind of responsible for Eric’s death, so that's obviously a problem, but do you think that it's going to, I don't want to say change his opinion of him, but change, I guess, the way that he interacts with him? Because I mean, he basically saves his life, even if he's kind of, you know, a dick about it. So, can you kind of talked about that?

Yeah. I mean, he certainly does save his life, but I think there's a part of Aaron that believes that the only reason he saved his life is because he realizes that if I were to be killed for whatever reason, there would be questions asked. The only two options that Negan has at that point are to run and go off on his own, which is a possibility, but then he'd have to start over from scratch, and he might not be ready for that. But the other alternative, if they found my body, [laughs] eaten alive by the walkers, and he's nowhere to be found, I'm guessing that he knows there would be a search party after him, and they would not be too happy when they found him. 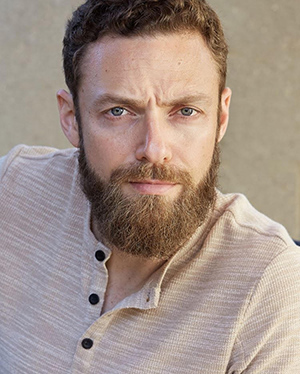 So, I think that's less about Negan turning into an altruistic person as it is him just being aware of the optics of it all and saying, “I could kill him, or I could leave him to die, but it'll probably be worse for me in the long run. So, why don't I just take out these two walkers and help him out?” It might gain him some favor in the community, and they might treat him with more favors moving forward.

So, it won't necessarily make Aaron more trusting of him then. I can understand that.

So, can you talk about working with Jeffrey Dean Morgan in the episode?

I love working with him. I mean, this was the first time that Aaron and Negan have had a one on one scene. The only times we've seen him before is in the clearing obviously with Glenn (Steven Yeun) and Abraham (Michael Cudlitz), but the next time of course was the Savior battle. And that was just a group sequence, so no real one on one interaction ever, really, aside from when Negan is individually taunting all of the people in the lineup with a bat.

But it's amazing that it took three and a half years, essentially, you know, from 616 to 701, when Glenn and Abraham get killed. The next time we see these two men square off is 1003, and I think that that's wonderful, because you get to see all this pent-up emotion and aggression let out in a real way.

And for one, I think Jeffrey was just a total pro about being tripped up take after take. I actually started to feel bad [laughs], because I just didn’t want to hurt him. But, you know, he was super professional, and he made some incredible choices with how he was taunting me and how he was manipulating me throughout the scene. And I just really enjoy working with him a lot.

Yeah, I think that that scene was a long time coming.

Yes, they did a fantastic job with the prosthetics and everything on the show. Justin, our lounge tech, fitted me with four different options [for my arm]. I was really hoping for the more gnarly looking one of the four, but they thought that I looked a the little too zombiesque. So, she switched those out and we went, I think, with the second most severe option in terms of context, and that had a good amount of irritation in it, a good bit of redness in it, but it wasn't quite as pronounced. 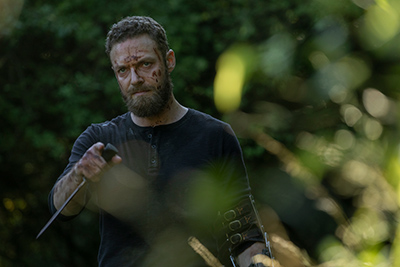 And then on top of that, they fitted me with this really gnarly epoxy goo over my eyes that dried pretty thick and made my eyes look extremely puffy, like they were irritated by the hogweed, of course. So, the overall effect was one of extreme irritation around the eyes.

I think it looked great, and I totally bought that I was blind [laughs] when I watched it. I was like ,”Oh yeah, that looks like he’s having a hard time seeing,” [laughs] And certainly with the way they shot a lot of those point of view shots when he first gets hit with the hogweed helped a lot with selling that. So, I thought that overall both the camera crew and the special effects makeup crew did such an incredible job of creating that illusion.

Yeah, they definitely did. It doesn't sound comfortable though, which was kind of the other question I had.

The other question I had, and obviously now it's been awhile, but was it hard to kind of get used to having to always, you know, wear something over your arm? Or does it help with keeping in character? Like, is it ever a nuisance, or you enjoy that?

It’s definitely uncomfortable, but at the same time, it's such a great challenge to have. And I love it, because it's I think a physical manifestation of the pain and the loss that Aaron has endured both literal and emotional. The log rolling onto his arm certainly would cause a person a great deal of pain, especially when it has been amputated in the apocalypse. [laughs] But I think it's also a manifestation of losing Eric and losing Jesus and losing Tara and Enid, and all these people that he cared so much about. I love it. I love it for the character, and when Angela [Kang] pitched it to me last year, I thought was such a beautiful story arc for for Aaron and a wonderful challenge to play as well.

Rick’s been gone, and now that Michonne is leaving and obviously Darryl (Norman Reedus) is kind of set up to take the lead, will that give Aaron a chance to finally kind of step up as his right-hand man, you know, have more responsibilities? 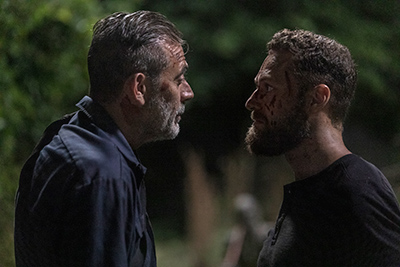 [laughs] He did lose his left hand.

Yeah, I think so. I think Daryl’s always been the person that is one of the main leaders of Alexandria. He obviously brought the group to Alexandria in the first place, so it stands to reason that he would be in charge of that community and certainly one of the biggest leaders of all the communities.

I see Daryl being the leader of kind of all of the realms to a certain degree, because he's like an unofficial leader. I mean, Daryl was kind of leading Hilltop for a while, and of course, Maggie (Lauren Cohen) before that. And, you know, these different folks, these different characters, they have their own particular subsections of communities, but I really feel like Daryl is kind of the overseer of all. He’s kind of the guardian of all those communities.

So, I certainly think that Aaron will step up and be one of the biggest fighting forces of that. Of course, he's leading the militia now, and he's positioned himself to be a formidable fighter, both before everything with the Saviors and the Whisperers, but also I think after getting the training they had with Jesus. It's made him a very formidable fighter. I think that he's going to use those skills moving forward to protect each of the communities.

Now that Jesus is gone, obviously Aaron isn't going to have a relationship with him or anything, but is there any other kind of love interest on the horizon? Or are they so busy fighting right now that it's not going to matter?

I think it’s one of those things where this show has entered an era where love is not the biggest [laughs] priority, even though they try to keep pushing, you know, Eugene (Josh McDermitt) and Rosita (Christian Serratos), or I should say, Eugene tries to keep pushing Eugene and Rosita. [laughs] “Eurita,” I guess we could probably call them, or “Eunita?” Maybe “Eunita” or "Rosene." Rosene sounds kind of cool; I like that. [laughs] 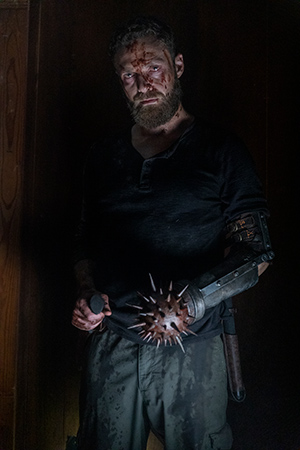 But I really feel like at this stage in the show, with everything going on with the Whisperers, love is not a big priority right now. And I think if we were to try to make any sort of love story happen between any of these characters, it would kind of be crowbarred in, forgive the pun, and maybe unnatural.

Before you go, is there something that you can tease about what’s coming up for the characters?

Oh, sure. I mean, I think the next few episodes you're really going to see the paranoia and the fear that the Whispers are trying to enact really come into play. I mean, they are absolutely playing psychological warfare on all our heroes, and you're going to see certain relationships with those Whisperers being tested. And that's probably all I can say for now. [laughs] It’s psychological warfare on a very extreme level.
Twitter
BotonSocial por: SocialEmpresa
Category: Interviews