Recently the film Books of Blood, base on the horror anthology by Clive Barker, was released on Hulu. The film weaves three stories into one. The first story follows Jenna (Britt Robertson), who after a traumatic event involving her boyfriend, is about to be sent away to a mental institution called, "The Farm." Refusing to go, she runs away from home and ends up at a bed and breakfast run by the seemingly sweet couple, Ellie, played by Freda Foh Shen, and Sam (Nicholas Campbell). Jenna soon discovers that the bed and breakfast is not what it seems.

Recently the actress took part in a press junket for the film that SciFi Vision attended. She talked about connecting with the role, working with Robertson, and more.

Be sure to stay tuned for more interviews from the film.

SCIFI VISION:  Can you talk about how you first got involved in the film? 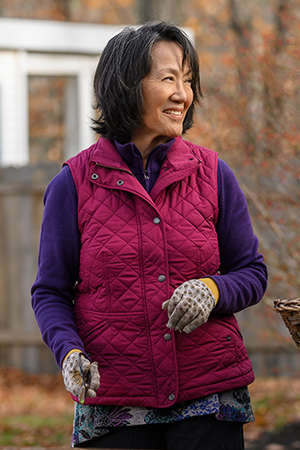 FREDA FOH SHEN:  Just the normal way. I got a call from my wonderful, wonderful agent who said, "Sending you a great script," and it was indeed a great script. It was the kind of role and script that any living, breathing actress would jump at, and I did. [laughs]

It was a really great part. I really loved the film, although it scared the crap out of me, especially your story.

It was quite freaky.

So, was there anything in particular that you did to prepare for the role? I don't know, films you looked at or anything, to get ready?

Actually, nothing as far as films I looked at. What I did do was go to a hospital - this being pre-COVID times - and just wander around and get a feel for it.

Then, of course, I did research about what kinds of implements I would be using, how skilled I might be at them. I did do a little bit of research, but I really didn’t need to do any in terms of relationships between doctors and nurses, because I think a great deal of Ellie's root anger came from the injustice of that system to her, where doctors who have nothing to do with patients and often have no idea that they're talking to a living human being - and I'm speaking as Ellie now, not as myself - They are allowed to dictate things to nurses. And nurses have a much more personal, intimate relationship with their patients, so they're more in tune with what a patient might want, let alone need.

Yeah, that's often true. A lot of times you get nurse practitioners they spend more time with you.

So, was there, and I guess this connects with that if you didn't really watch any movies, but was there anybody at all that maybe inspired some of the way you played Ellie?

In this case? No, thankfully. [laughs]

I mean, I've had roles where I played my mother; I have had roles where I played both of my sisters - you know, one at a time, and those are really clear to me - and roles for friends, but there was no role model for this. There was only the understanding because Brannon [Braga] and Adam [Simon] and Clive wrote her this way, that she is motivated by love and the maternal instinct, the desire to protect. That is her thing; you’ve got to protect the garden. Whatever you're growing, whatever looks to you for protection, you have to do that. And in Ellie's mind, there are not a lot of people who have both her skills and Sam’s skills and her strength of character that you could do this for other people. That's my feeling.

I'm just thinking about the people who read who haven’t seen it yet will have no idea. [laughs]

Yes, I know. We're not doing any spoilers here.

I've seen you mostly on Elementary, so this is definitely a departure.

I love that show. I had been doing a rewatch of it not that long ago.

So, I'm guessing what you said about nurturing is the part of her that you connected with? Obviously, there's a lot of darkness there. Was it hard to get into that, and did it stay with you at all?

She stayed with me, but not in a bad sense, because when I’m in her, I don't perceive it as darkness. I'm sorry to say, but you lose your perspective, and that's part of what allows you to go on. What you see and what you see at the end of the film are the good results. You see what you've given other people, and that's what's most important. The perception of the outside world is not something that I allow in.

Well, you have to look at it differently too when you're playing the part.

Are you a fan of the horror genre in general?

No, I'm totally a wussie. It is so scary to me. [laughs] I never was into watching any of those Freddy [Krueger] movies or any of those. No, too scary. From the outside perspective, way too scary for me. [I get] nightmares.

Not necessarily what you watch, but just in general, since this is a horror film, I’ll ask you, "What is it that scares you?"

What scares me, especially when I watch a film or video presentation, are the images. It's because I cannot get rid of the images. A lot of times if I read something, I can dilute the impact of the words, but when I see it, visually, I'm a very visual person, and I find it very difficult to get rid of that image once I have seen it.

I watched a National Geographic documentary once about I believe it was the Lamar pack in Yosemite or Yellowstone, I forget. Anyway, a wolf pack, and what it showed was [violent]…The image I could not get out of my mind…I just cannot watch these anymore.

Is there some scene that you particularly liked that you can talk about without completely spoiling it?

Oh, there're so many, but I would say the scene where I sit and talk to my guest and explain to her what I'm doing, why it will benefit her, what’s happening. I don't know if you remember. It's not a scene that has action in it. We're just sitting at the kitchen table and talking. I love that, because what I say is so much the heart of who Ellie is, of course.

I mean, there were other things I love too, but some of them are spoilers. [laughs]

Yeah, I know you can't really say a lot. Can you talk about working with Britt?

Oh man, she is phenomenal, I just have to say. She is so what we actors call "available" when you're on set with her, in the scene with her, which means that she's emotionally alive. If you do something, she does something; she gives 100%. She is never pissy, prissy, or any of those things. She was just fantastic to work with. She’s a really wonderful actress.

Nick and I, the actor who played my husband, Sam, we'd go off set after a scene with her and just look at each other and go, "Oh my god, and she's so young." She's really wonderful. She’s very vulnerable.

Without spoiling anything, can you describe Ellie in three words? That's always a hard one to begin with.