Tonight at midnight pacific, Netflix drops it’s six and final season of the hit series, Lucifer. The series picks up after Lucifer (Tom Ellis) has won against his twin brother, Michael (also Ellis), and is about to become God; however, he hesitates. How will he respond when the world starts to crumble without a God? Is he ready to rule, and what will become of his relationship to Chloe (Lauren German)?

Showrunner Ildy Modrovich talked to Jamie Ruby in an exclusive interview about the final season and saying good-bye.

This interview is spoiler-free, but be sure to stay tuned for part two of the interview, which will be posted about week after the final season premieres. 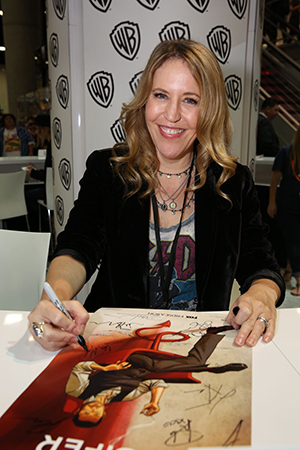 SCIFI VISION: I have a question I literally just got from a fan, and it made me laugh out loud, so I have to ask you. They asked me, “Why does Lucifer never lock his elevator or get a passcode or hire a doorman?” [laughs] I had to ask; that’s hilarious.

[laughs] Oh, my God. You know, that is funny. Although we have never seen anybody enter from the Lux level, we've seen people exit. So, there could be a code - but, oh, no, you're right. Bad guys have gone up there. [laughs]

Ignore that. Thank you, fan, but no. [laughs] You know, whenever we get something, a question like that, I always say, “We're a show about the devil solving crimes. That's my answer.” [laughs]

Speaking of some of the crazy stuff that's happened on the show, how did you come up with the idea for the cartoon, because that was just really cool.

Well, that is the one Joe [Henderson] wrote this season, and so I will answer for him that, you know, he's a comic book geek - a self-proclaimed comic book geek. He just always [wanted to], sort of like I always wanted to do a musical episode. He always kind of had that in the back of his head, and when we got this extra season gifted to us, that was the first thing he said, “That's what I want to do.” We were like, “Fabulous.”

So, we started talking about it very early on. He had conversations with Warner Brothers about getting their Harley Quinn animators. They found out they were available kind of off-season. So, we'd locked them down and started the process pretty early, because we knew it would take a while to get all the animation done.

Now you mentioned the musical episode that you wrote. What was your favorite song, if you could pick one.

Oh my gosh, from that episode?

Definitely, "I Dreamed a Dream."

Okay. I listen to that soundtrack way too much, well, the two.

It gets me every time. And the day it was filmed, it was just a very magical moment on set, one of those moments that you you just don't forget. Tom’s sister was there visiting. She had never been on set before, and she's like, “You [and Dennis Haysbert] seem like father and son; there's a dynamic between you that's so familial.” And there was so much love between them at that point that it was even more heartbreaking. There wasn't a dry eye in the house, like all the cameramen, we were all we were all crying our heads off.

So, is there anything you were given or took from the set kind of in memory of the show?

Give me a moment. I'll show you.

Ready? [Ildy pulls out the clown mermaid painting from episode 2.13]

Right? So, I got this, as well as I got small little things that there were multiples of, like I have Lucifer's ring. I have Chloe's bullet necklace. So, I have some little things like that are sentimental, but that's my big one.

Yeah, but that's definitely more for sentimental reasons. People that don't know why are going to be like, “Why did you ask for that?” [laughs]

“Why do you have that?” I know. That's why I wanted it, and I always knew I wanted it. When we wrapped, I was like, “I'm getting that clown mermaid painting.”

All right, well, throughout the years, do you have kind of one memory - if you look back on the show ten years from now, what’s gonna be that one thing that sticks out that you think about first? I know there're probably tons of things.

Oh, my gosh, all all of a sudden, they're all flooding through my head. You know, the one moment that just jumped in my head was when we did our very first musical number, and it was for the Vegas episode where Ella (Aimee Garcia) is in the show girl costume and Lucifer's singing “Luck Be A Lady.” I walked into the rehearsal space where they were choreographing it and rehearsing it, and they were all in their costumes. They were like, “Okay, okay,” and they sat me in the middle, sat me down, like, “Okay, ready?” They performed it, and tears were streaming my face, because it was just such a “What? Is this my job? I'm the luckiest person in the world.” [That’s] how I felt in that moment. I really felt so lucky to be able to do such silliness and such fun, and it just hit me in that moment. And kind of every moment after that, there was something like that, that just made me tickled. I [became] more and more grateful. 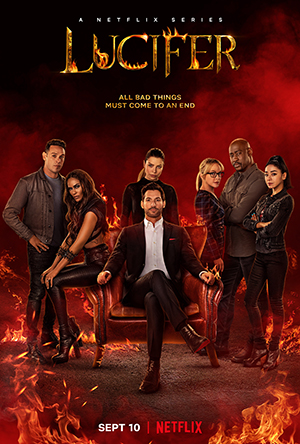 Out of curiosity, did you originally think that there would be that much music in the show, or did some of it come because of Tom? I just kind of wondered.

Yeah, you know, we didn't. I guess that in the first episode, Delilah was the singer, and Lucifer let her play in his piano bar. So, he had a piano bar, so we knew maybe he’d play. And I remember the very first time we pitched having him sing a song, which was “Sinner Man,” we were met with some resistance. They were like, “Oh, jump the shark time.” We're like, “…if we jump the shark, we'll just own it. Like, we're gonna jump it repeatedly.” So yeah, it was a gradual thing. And because Tom is such great singer, and because he loves it so much and loves to dance, and then we found out pretty much practically our entire cast also could sing, so it just grew and grew and grew kind of organically that way.

What's something that maybe fans don't really know about the show that you think they should know that they'd be interested to find out? I'll leave [that] one up to you.

Oh, my gosh, let's see, what the fans don't know about the show? Do they know that we moved from Vancouver to Los Angeles?

Do they know that? That's one. Oh, gosh. I'm gonna think of something as soon as we hang up. That we're all really angels and demons and that I myself have wings that can go through my clothes magically.

Actually, I have another that's a quick answer you can give me. I'm curious, because you posted about it on Twitter, but never gave the answer. What house did you get into in Hogwarts when you all sorted yourself in season one?

***Be sure to stay tuned for part two of our interview, and get all the juicy details of the season, as well as interviews with cast members!***