October 8th, Leverage: Redemption returns to IMDb TV. On the series, Gina Bellman plays the role of Sophie Devereaux, the head of the Leverage crew. When the rich and powerful take advantage of others, the Leverage team helps to provide the justice they seek. Newcomer to the team is Breanna Casey, hacker Alec Hardison (Aldis Hodge)’s sister, played by Aleyse Shannon.

Bellman and Shannon recently talked to Jamie Ruby of SciFi Vision in an exclusive interview about the second half of the season, some of the challenges they’ve faced, their favorite scenes, and more.

Bellman talked about getting back into the rhythm of the series and the natural chemistry that the cast has. “I've never been good at anticipating things, so I think I was quite nervous before I arrived in New Orleans. It’s like, ‘How's it gonna go? Are the rhythms still going to be there? Is it going to click?’ But then, as soon as I had my first fitting with Nadine Haders, we were like, ‘Oh yeah, that's Sophie.’

“…Then, we got into the read through, and just hearing everybody's voices and talking over each other, just the rhythms, it just felt like we fit in right away. I mean, [there are] some technical things, as an actor, to be able to learn those lines, so many lines, to so quickly learn the accents, jump from episode to episode to episode, never having advance copies of stuff, that stuff, you do need to get into a rhythm. It takes a little time. There's a little a little balancing act going on in the beginning. 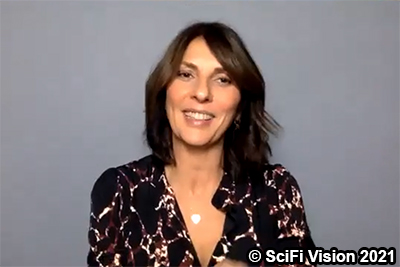 "…Then, obviously, when Aleyse and Noah [Wyle] joined us, there was a feeling like, ‘How's the dynamic going to be?’ but as soon as we started working with those guys, we just felt this chemistry, and it just felt so natural.”

The actress admitted that sometimes learning all the lines is difficult, especially when her character takes on multiple identities. “It's quite hard for me to do those tiny little cons that are just a few lines here and there, because I have to make it interesting every time.”

Shannon, who has long amounts of lines to remember actually doesn’t find the memorization to be a problem. “I have a really good memory…but those parts, I think they're difficult, because I go in my head, it’s like, ‘How do I still give, even though I'm delivering a whole page of stuff.’ That's the difficult part of it, not rattling that stuff off, but how do I still give and get outside of myself, even though I'll be talking for the next four minutes. So, yeah, [it's] challenging for sure.”

Shannon also admitted she asked the other cast members and crew for advice as the show is quite fast paced. “It is hard to get the rhythm down, but it's just, even when you're scared, even when you're nervous, just making sure that if your ears are closed, you open them back up so that you can really take it all in and get flowing with it. I mean, shout outs to also like Gary Camp and Vince [Bearden] and Dave Connell for teaching me how to hit a mark, things like that. It's also hard to do. It's your body, it's your mind, it's the lines and your creativity all firing at the same time. So, it can be tricky, but I think we got the hang of it.” 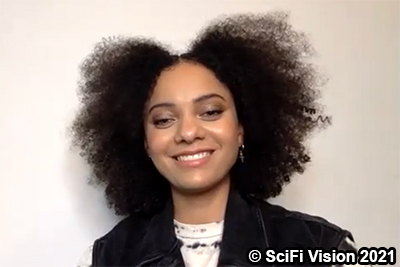 In the back half of the season, Shannon’s character gets to do more than just hacking, and she loves it all. “I think every time I get to do something new, that's always my favorite thing coming up next. So, I think that's the thing that excites me.”

Bellman said that she’d love her character to do a bit more thieving, as they haven’t done that much on the new series. “I'd like to maybe do some thievery, because Sophie was famously an art thief, but…I don't know, have we ever actually seen her steal something? I'd quite like to do like the Mission Impossible kind of [thing], like hovering over a Faberge egg maybe one day.”

The two teased some of their favorite scenes of the last eight episodes. Bellman enjoyed those dealing with the mysterious RIZ. “In the finale episode, I get to really play a long con with our sort of arch enemy played by Lucy Taylor, the head of RIZ. In fact, I really liked both the scenes where I faced off with her. There's a long scene in the finale where I face off with her, and there's a scene in “The Bucket Job,” in Beth [Riesgraf]’s episode, where I face off with her, and I did quite enjoy that moment.”

Shannon’s favorite was in “The Great Train Job,” also directed by Riesgraf this season. “Ari [Krebs] did a guest spot in that episode, and that was fantastic. It was good energy for I think Brianna to get a hold of sort of the softer, gushy parts of her and to really explore that and not always trying to be living up to something but seeing someone that's very like her on a horizontal plane. I had a great time with Ari. So, those are some of my favorite scenes to play too.”

Watch the rest of the interview in the video below, and be sure to check out Leverage: Redemption when it returns to IMDb TV October 8th.