This year, as Bambi celebrates its 75th anniversary, it joins the Walt Disney Signature Collection. The anniversary edition of the film contains most of the bonus features of the original release as well as all new ones.

Disney's Bambi, which was originally released in 1942, tells the story of a young deer named Bambi who learns about life and loss while meeting friends along the way, including Thumper, a rabbit, Flower, a skunk, and more, and becoming prince of the forest. 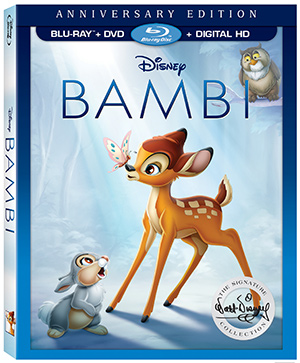 Bambi is a classic tale, and it was great to see it added to the Signature Collection. The film is cute, and seventy-five years later it still holds up as a fun and poignant film.

The story is simple, but it still strikes a chord with audiences years later with its themes of death and renewal.

The characters are of course adorable as most Disney characters tend to be, and I enjoyed the more realistic approach.

The animation style may be old, but not lacking. It was interesting to see the tricks they used back then on the film. Having been previously remastered, the colors of the film are vibrant and the images clear.

There are three different versions of the film available on the disc. The first is the original full-screen theatrical version (1:09:50), and the second is the DisneyView version (1:09:50), which adds artwork by Lisa Keene to fill in the black bars at the sides of the screen. Lastly is Inside Walt's Story Meetings: Extended Edition (1:35:55), which adds a commentary track made of a dramatic recreation from transcripts of story meetings and sweatbox sessions from the Walt Disney Archives at the Disney Studio from between 1937 and 1940, which includes behind-the-scenes clips photos as well as concept sketches, storyboards, and other artwork. The pieces shrink the video to the bottom right corner as they are displayed. At certain points the film pauses to play additional material (in HD), some available elsewhere on the disc, others not.

Personally, I prefer the original theatrical version if I’m watching the film, as the extended edition, though interesting to watch for more information, makes it hard to follow the story, as it shrinks and at times pauses it.

There are quite a few special features for the film. It includes new bonus features, as well as a large set of classic ones. They cover most areas of production, including how the movie went from book to screen, how it was made to look more realistic than previous films, how the film was animated, techniques and technology that were new to Bambi and how they affected future films, how future films were inspired by the classic, as well as a selection of deleted scenes. Also included is footage of Walt Disney himself, as well as behind the scenes looks at some of the unused material from the movie. Most features are in full screen.

Studio Stories: Bambi [4:56] - The feature shows clips with a Walt Disney voice over that came from a series of interviews conducted in 1956. He talks about removing parts from the original book, as well as bringing in live animals for his artists to draw from so they were more realistic and creating the effects department. For effects they did experiments to see how things looked such as breaking glass and recording water droplets in slow motion to study. Also discussed is how they started using multiple planes for the camera to move through to create depth.

Oswald the Lucky Rabbit: "Africa Before Dark" [5:50] - A black and white short cartoon of Oswald.

The Bambi Effect [3:00] - This feature talks about how future Disney films were influenced by the way Bambi was created. Walt Disney wanted more realistic animals for the film as opposed to those in previous ones like Snow White. He set up art classes with live animals for his artists. For backgrounds, real-life nature was too busy, so they were made more dreamlike by Tyrus Wong. Disney also created a department for effects dealing with things such as rain drops, fire, smoke, and snow. Also discussed is the first credited female editor, Retta Scott, who blazed the trail for other females.

Bambi Fawn Facts [3:34] - This feature, obviously for a small child, talks about the different animals in the film, including deer, skunks, and rabbits, their names for male/female/baby versions, what they eat, where they are found around the globe, and other little tidbits.

Classic Deleted Scenes - There is an option to play all

* Bambi Stuck on a Reed

The Making of Bambi: A Prince is Born: This feature, which is split into six parts, has an option to play all. It includes interviews and information from authors, film historians, and those who worked on the production itself or currently work as part of Disney or at Pixar.

* Story: Telling the Tale [8:59] - Discussed are things such as themes of Bambi,
including the circle of life and struggling with death; it's a coming of age story of
what happens when someone loses their parents and are metaphorically kicked
out of the nest. The Lion King was greatly inspired by Bambi.

They talk about how the story is not a straight dramatic one of good beats evil,
and how it was difficult to put together the story and easy to get off track. They
created and sketched hours’ worth of superfluous scenes that ended up being cut,
such as a bee in Bambi's stomach that talked to him and the hunter actually
coming into the forest, interrupting nature. They also talk about how originally
Bambi's mother's death was going to be shown, but was changed.

Also discussed is how much Disney was involved in the film, as well as a bit
about visuals and music.

* Characters: Drawn to Nature [8:59] - In this feature they talk about developing
the characters, touching again on using naturalism and real animals as reference,
bringing in experts to teach the artists and animators. Disney wanted animals
who had the characteristics of human beings, but behaved like animals.

* Actors: Giving Voice to Animals [6:44] - For the voice actors and actresses they
used children who were not famous, which made it seem more real. The
actors/characters focused on are Peter C. Behn, who voiced Thumper, Donald R.
Dunagan, who voiced Bambi, and Cammie King Conlon who voiced Faline. Casting
and such is discussed.

* Art Design: Impressions of the Forest [9:56] - This feature discusses the
background design and how it is less precise than the characters and much more
impressionistic. Using realistic background used too much detail that made the
scenes too busy, taking away from the characters. The artist that created the
look used in the film is Tyrus Wong. His Chinese-inspired esthetic doesn't as
much depict nature as it does the feeling you get when you are in the woods.
Wong talks about his work as well. His start at Disney is also talked about.

Also discussed are how they worked to create what Disney called the "plausible
impossible" dealing with things such as effects. It doesn't have to look exactly
real, but plausible. Yet the work is also impossible, because animals don't talk,
yet the film seems real and the animals alive.

Experimenting with and creating other effects, such as fire and snowflakes,
frame by frame animations, and the multiplane camera are also discussed.

* Music: Nature's Symphony [8:06] - The subtle music of the film is discussed,
from the songs to the score. Dialog is minimal in Bambi, so the music is very
important, as are the moments of silence. Also discussed is how the different
styles of the composers Fran Churchill and Edward Plumb worked together.

* History: Back to the Beginning [10:28] - This feature talks about how the film
went from book to screen. The original book, published in 1928, was written by
Felix Salten, who's story was noticed by Sydney Franklin, who brought it to
Disney to option for film.

The film took a lot of effort to get made, as a lot was going on at the time, such
as World War II and the union strike. Disney and his company were in debt at the
time, and they talk about how he talked the bank into backing the film.

Tricks of Our Trade (excerpt) [7:18] - This feature is Walt Disney explaining the multiplane camera and how it improved animation. There are examples of how they can move around different layers of the background to create depth.

Inside the Disney Achives [8:39] - Supervising animator Andreas Deja takes a tour of the animation research library where art from their films are stored. Most of what is shown was from scenes that were cut from the original Bambi that are talked about in the other feature "Story: Telling the Tale." Included is artwork, story sketches, Wong's sketches the background painters were inspired by, and the background art used that was used on camera.

The Old Mill: Animated Short [8:58] - An animated short that experimented with tricks for effects that were later used in Bambi.

The Golden Age: Original Theatrical Trailer [2:12] - The original trailer, which also appears to be left in its original state.

Sneak Peeks: The disc is front loaded with trailers for the upcoming Cars film and the new live-action Beauty and the Beast. You can also access these from the main menu.

The Anniversary Edition of Bambi, which is also part of the Signature Collection, is in the normal blue clamshell case and includes a blu-ray disc and a DVD, as well as a code for the Digital HD version. On the flip side of the code is an ad explaining Disney Movies Anywhere and Disney Movie Rewards, which are included with all of their films. Also inside is a double sided ad for Disney Movie Club and a post card sized standup print of artwork by Tyrus Wong.

The Anniversary Edition of the film includes many bonus features that fans and new viewers alike will appreciate; however, if you own the Diamond Edition, most of the features are included. The film itself is enjoyable and I recommend this set to Disney fans.