Pacific Rim Uprising takes place ten years after the events of the original blockbuster film, when humanity won the war against the Kaiju, an alien race who came to earth from another dimension through a breach in the ocean floor.

The film follows former pilot Jake Pentecost (John Boyega), the son of a legendary Jaeger pilot who sacrificed himself to save the world.

While most cities of the world have rebuilt, some relief zones still remain, where people like Jake survive by selling old Jaeger parts on the black market. 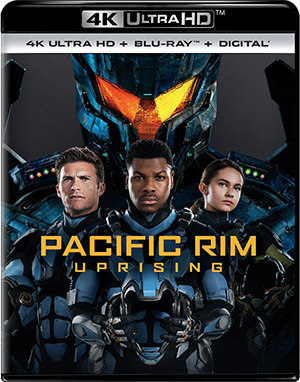 A heist goes from bad to worse for Jake when fifteen year old hacker Amara Namani (Cailee Spaeny) steals the part he is after and they are caught while escaping in her home-made Jaeger, Scrapper. Jake is given the choice of going to prison or returning to the Pan Pacific Defense Corp to reenlist to train the next generation of cadets with his former co-pilot Nate Lambert (Scott Eastwood). Amara is also brought into the cadet program in leu of prison.

After arriving at Shatterdome, they learn that the Shao Corporation, led by Liwen Shao (Tian Jing), has been working to create a army of drones, making it possible to control the Jaegers remotely, removing the need for drifting, a dangerous sort of mind meld between pilots that has since been a requirement to control the machines.

When the PPDC is suddenly attacked by a rogue Jaeger, everyone fears the Kaiju have returned. The drones are deployed, but when things go wrong, Jake, Nate, and the young cadets may be humanity’s only hope.

Going into Pacific Rim Uprising, I had seen the previous film, but not since watching it in the theater five years ago. I did not do a rewatch, as I thought I remembered enough of the idea of the movie to be able to jump right in. However, I found myself confused at the beginning with some of the terminology and backstory, particularly the idea of drifting and how the humans won the first war. I ended up stopping the disc and looking up a summary of the first film to refamiliarize myself with the events, which greatly helped. I admit I’m the kind of viewer that likes to have information going in, though it’s likely that I would have caught up if I kept watching. So, if you do have access to the first movie and the time, I suggest you watch it first, or at least do what I did, rather than going in cold.

That being said, Pacific Rim Uprising stands up to its predecessor. It did not feel excessive or fall short like some sequels do. It definitely worked as its own standalone story, adding to the franchise. The film is full of the action you would expect from the original, with giant mech robots fighting monsters, knocking down buildings in their wake. The massive scale of the Jaegers and Kaiju works. The designs for the robots and aliens have both been updated and the weapons and abilities enhanced, which make for some thrilling action scenes. The addition of Scrapper, scrunching up and rolling around the bigger Jaegers added something different, and the Mega-Kaiju was a really cool addition as well, ramping up the fight.

The other visual effects were also excellent; everything looks exceptional in 4K. I really liked the integration of the holograms into the drifting as well. The in sync movements also added to the effect.

The script worked well, adding a different twist to the story and a surprising villain that helped keep the sequel fresh.

The stars of the film, Boyega and Spaeny played really well off of each other, and I enjoyed seeing their banter and their friendship grow throughout the film. Other standouts were Burn Gorman as Hermann Gottlieb and Charlie Day as Dr. Newton Geiszler, as their relationship is interesting and it was great to see them return. The other actors made for a well-rounded cast.

The only negative I would say for the film, is the storyline isn’t super deep or emotional, but that’s not what you generally expect when it comes to this type of action flick, and it didn’t detract from the movie in the slightest.

If you are looking for a fun film with non-stop action, be sure to check out Pacific Rim Uprising; you won’t be disappointed.

Deleted Scenes [6:57] - There is an option to play the scenes individually or all at once with the option of commentary by the director/co-writer, Steven DeKnight. There are eight scenes available: “Alt. Party James Gunn,” “Amara Arrives at Shatterdome Part 1,” “Amara Arrives at Shatterdome Part 2,” “Amara Meets the Cadets,” “Jake & Nate Discuss Jake’s Return,” “Amara Meets Liwen,” ‘Newt and Alice,” and “Kaiju Brain from Fury.”

Hall of Heroes [3:26] - John Boyega talks about the new and improved Jaegers, how they have been upgraded, their weapons, and their material. Jaegers included are Gipsy Avenger, Bracer Phoenix, Guardian Bravo, and Saber Athena.

Bridge to Uprising - [4:40] - The director/co-writer Steven DeKnight and Boyega talk about how the universe of the film has changed over the past ten years. They were able to rebuild the Jaeger program from the ground up, as well as upgrade the Precursors/Kaiju. DeKnight wanted to honor producer Guillermo del Toro’s vision, who directed the first film, but also push the franchise and mythology forward. Actor Scott Eastwood also talks about his character training the cadets. In between the interviews are behind-the-scene shots, concept art, digital elements, and clips.

The Underworld of Uprising [3:47] - The director talks about state of some of the coastal cities and relief zones, and how some of the people make money stealing parts of Jaegers and selling them on the black market. He also talks about Jake and Amara. Boyega and Spaeny also talk about their characters, how they met, and how they change throughout the film. Some behind-the-scenes footage is shown.

Becoming Cadets [5:59] - The cast talks about their characters and working on the film, as well as the characters being a family and how they similarly became close working together.

They also talk about training, and cast trainer/nutritionist Naomi Turvey talks about the four months they had to prepare.

Also discussed is learning the Conn-Pod movements and having to be completely in sync with each other.

Unexpected Villain [5:48] - Charlie Day talks about his character Dr. Newton Geiszler, and how his character arc changed in the second film. He also talks about the challenges of playing that switch in persona. The director also is interviewed, who discusses the Kaiju brain Dr. Geiszler has been keeping and how it has manipulated him.

They also discuss Geiszler’s relationship with Hermann Gottlieb, played by Burn Gorman, who also weighs in.

Next Level Jaegers [5:09] - The director talks about the PPDC coming together and rebuilding the Jaeger program from the ground up. Also discussed is the look of the film, specifically the Jaegers, and wanting to keep the original DNA of the film, but pushing the look and feel. Producer Cale Boyter, production designer Stefan Dechant, and visual effects supervisor Peter Chiang are also interviewed. Besides behind-the-scenes footage, concept art and digital effects are also shown. The cast also talk about things such as miming where the holograms would be edited in post-production and the challenges of using the treadmills for the Conn-Pods.

I am Scrapper [2:43] - The director talks about the tiny 40 foot tall Jaeger that Amara built, that was small enough to be run by one pilot, as well as some of its special abilities. Spaeny discusses talking to the people in production who actually built Scrapper. She was actually able to take part in making the Jaeger by welding a few pieces together.

Going Mega [3:21] - The director talks about each of the Kaiju and their weapons, abilities, and design, as well as the three of them combining into the Mega-Kaiju after they are torn apart by the Rippers. More of the visual effects are also discussed by Chiang.

Secrets of Shao [3:15] - Jing Tian and the director talk about her character Liwen Shao and the drone tech, which had to be Jaegeresqe, but also have a unique feel. There are also behind-the-scenes clips of the remote conn room.

Feature Commentary with Director Steven DeKnight [1:50:45] - The director/co-writer talks about the filming and production aspects of Pacific Rim Uprising.

The 4k Ultra HD combo pack comes packaged in the normal black clamshell case with slip cover. The bonus features are all on both on the 4K and Blu-ray Discs.

Included is a digital code for Movies Anywhere, which will redeem in 4K. On the flip side of the sheet is an ad for other Universal blu-rays. Also included is sheet with a code and information on how to get a free Universal digital movie, with an ad for the official graphic novel prequel to the film, Pacific Rim Aftermath, on the reverse.

Pacific Rim Uprising is an terrific sequel that stands on its own; it’s an entertaining and wild ride. The set comes with enough bonus features to satisfy fans, even if they are short features. It is also worth the 4K UHD upgrade for the phenomenal visuals. If you’re looking for a good action movie this summer, it’s definitely worth checking out.
Twitter
BotonSocial por: SocialEmpresa
Category: DVD Reviews