From writer and director Neill Blomkamp (District 9), the science fiction film Elysium comes to 4k Ultra HD. The film stars Matt Damon as Max, who grew up on the slums of an overpopulated Earth with his friend Frey (Alice Braga), dreaming of the luxurious lifestyle of those on Elysium. Secretary Delacourt (Jody Foster) will do anything in her power to keep those of Earth away from Elysium, but that doesn’t stop them from trying. After a life-threatening accident at work, Max is willing to do what it takes to make his way to Elysium to be cured. Agreeing to steal information from John Carlyle (William Fichtner), Max is outfitted with body mods and an exoskeleton by Spider (Wagner Moura) and sent on a deadly mission pitting him against the rogue Agent Kruger (Sharlto Copley). He gets more than he bargained for when he receives information that could bring equality to the two worlds.

I very much enjoyed Elysium. The story of the movie is relatable to the world today, featuring social commentary on issues such as social class division, health care, and more, yet is not patronizing. It’s also, just in general, a really fun sci-fi movie with a good script.

The film also looks fantastic, from the sets to the special effects. There is so much detail in everything, and the worlds of Elysium and future LA are really believable and make you feel like you are there. Blomkamp really knows his world building, and everything just fits together perfectly.

Damon is perfect as Max. He not only embodies the character, but obviously he is a great action star, so the role really fits him. I also really liked his scenes with Copley, who makes an excellent adversary. The entire cast, actually, was well chosen.

Overall, I really was pleased with Elysium. It’s non-stop action and entertaining all the way through. I definitely recommend the film, especially if you are a science fiction fan. 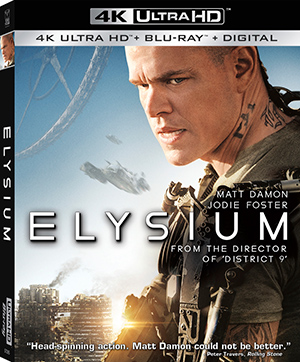 Visions of 2154 - This feature is of the art and design of the film presented in an interesting way inside a computer interface. There are two sections: Elysium and Earth (Armdyne). Each is split into five tabs/sections of various artwork of the film. Although the tabs are not labeled, essentially they consist of robots; sets, locations, and storyboards; tech, such as Max’s and Kruger’s body mods and exoskeletons; vehicles, both air and land; and weapons. Each includes sketches, 3d renderings, and in some cases video clips showing real props or the items integrated into the film and the different CGI layers used.

Extended Scene: Kruger Wakes Up [1:45] - Extended scene in medbay when Kruger wakes up.

The Journey to Elysium - This feature is divided into three pieces. You can choose one or play all at once.

* Envisioning Elysium [8:46] - Director and writer Neill Blomkamp talks about his
original idea of the rich and the poor and the wealth discrepancy and creating
something sort of satirical. He was already fleshing out designs himself when
working on the script. Various members of the team are interviewed. The crew
also talks about Weta being part of the preproduction process. Also discussed are
the two basic locations of the film: the slums of Mexico City for future LA and
Vancouver for Elysium, including fancy mansion interiors. Also discussed by the
crew are the exoskeletons of Max and Kruger, the difficulties involved in creating
them and doing stunts in them, and other things such as tattoos and makeup.

* Capturing Elysium [26:31] - This feature is interviews and behind the scenes
shots of filming, mostly of action scenes and scenes with stunts and even
wirework, set up chronologically. It’s split between the Vancouver interior
locations and the landfill in Mexico City. There’s a variety of things discussed,
from Damon’s makeup and tattoos, to exoskeleton suit maintenance.

* Enhancing Elysium [10:31] - This feature focuses on editing, sound editing and
mixing, and composing the score. The editor, Julian Clarke, the sound designer,
Dave Whitehead, the sound re-recording mixer Craig Berkey, and the composer,
Ryan Amon, talk about each of their department’s work and how the
departments worked together. Blomkamp talks about putting it all together,
and producer Simon Kinberg and associate producer Victoria Burkhart also add
a few tidbits.

Exoskeletons, Explosions, and the Action Choreography of Elysium# [29:48] - Blomkamp, Kinberg, and special effects coordinator Cameron Waldbauer talk about using as much practical effects as they can versus CGI. Blomkamp also notes that he never wants to do action for the sake of action. They talk about working with Weta on different effects.

Sarah Rubano, the prosthetic makeup supervisor, talks about designing tattoos that are symbolic for each character, as well as applying them to the actors.

Next, Damon’s Hulc suit/exoskeleton, which was created by Weta, is discussed, including how it’s attached to fake skin attached to an undersuit he wears. Richard Taylor, the co-founder/co-director of Weta is also featured.

Aaron Beck, the concept designer from Weta talks about the GTR cars, from the design to driving them.

The filming location of the Mexico City landfill is discussed a bit. Stunt coordinator Mike Mitchell talks about working in an unfamiliar environment and how stunts and effects have to work well together.

The effects crew talk about the scene where Sandro (Jose Pablo Castillo) gets hit with Kruger’s little UAV’s and explodes and how they set explosives in a photo real dummy to pull it off.

Next is the showdown between Max and Kruger on the Gantry set in Vancouver. Stunts are shown and they talk about things such as keeping the actors and set wet for that extra element of flying water. They also show the stunt fight rehearsal and talk about each character’s fighting styles.

Some of the actors also talk a bit throughout the feature.

Collaboration: Crafting the Performances of Elysium [13:18] - This feature has interviews with the director talking about choosing the cast and coming to terms with having recognizable stars, as well as working with each of them. Producer Simon Kinberg and associate producer Victoria Burkhart also weigh in. The cast featured are Damon, Copley, and Foster, who talk about working with each other as well as the director.

The Hero, The Psychopaths, and the Characters of Elysium [6:15]# - Behind the scenes clips of filming are interspersed with interviews with Neill Blomkamp, and the main cast members talking about the characters, including, Damon, Copley, Foster, Fichtner, Braga, Julio Luna, and Moura.

The Technology of 2154 [10:13] - In this feature, Blomkamp talks about the designs in the film coming not from a scientific or speculative fiction place but based on metaphor. Richard Taylor, the co-founder/co-director of Weta Workshop talks about how Blomkamp likes the aesthetics to have a hyper realistic quality in detail, but they may do fantastical things. Others from the special effects department and Weta are also interviewed to talk about the practical effects. The main topics include androids, exo skeletons, and weapons.

The Art of Elysium Miniatures [4:40]# - This feature includes interviews with writer/director Blomkamp, visual effects supervisor, Peter Muyzers, and others about using miniatures to do effects practically rather than with CGI. Topics include crashing the Raven ship, problems with weather, the reasons to go practical, and more. Miniature versions of some of the sets are shown being filmed against blue screen.

In Support of the Story: The Visual Effects of Elysium [10:34] - This feature is on the visual effects rather than practical. Different members of the visual effects team are interviewed. The first topic discussed is the “Raven ‘Bird of Prey’” ship design, where they talk about using helicopters as stand-ins, creating a rig to move around the interior with the actors, and more. Next is about “Building the Androids” and how they start with actors that they replace with CGI. The third is “Healing Kruger,” where the effects team talks about blending practical effects, visual effects, and the actor’s head to show the regeneration of his face. Last is “Space Ships with Grit,” which talks about adding things such as rust and graffiti to the ships to make them fit the world.

Engineering Utopia: Creating a Society in the Sky [11:43] - Blomkamp talks about his favorite part of the film being the satirical nature of it. He wanted to reinforce the theme of rich versus poor. He talks about being inspired by artwork of a space station by Syd Mead, who became a conceptual artist in the film. Blomkamp and Mead talk about working with each other and how Mead was involved with Kinberg on creating the baseline aesthetic for Elysium. Production designer Philip Ivey also talks about working with Mead.

Bugatti 2154 [4:50]# -  Blomkamp talks about using the Bugatti luxury car brand for inspiration for Carlisle’s automated luxury jet. They got permission from the company to use their brand, whose lead designers gave input on the design. They also used sound effects from real Bugatti cars. Concept sketches, 3d renders, and other artwork are shown throughout. The feature also includes interviews with special effects coordinator Cameron Waldbauer, visual effects producer Shawn Walsh, and sound designer David Whitehead.

Trailers [8:29] -This feature, only available on the 4K disc, includes two theatrical trailers and one international trailer, which can be played separately or together.

# Available on both 4K disc and blu-ray discs

The Elysium combo back comes in the normal black clamshell case with slipcover. There is both a 4K Ultra HD disc and a Blu-ray disc. All of the special features are on the Blu-ray disc, except for the trailers, which are only on the 4K disc. A few of the features are on boths discs. Included is a sheet with a Movies Anywhere code for the film, as well as an ad on the flipside to register for Sony Rewards.

The movie itself is well worth a watch for science fiction fans. It not only has an enjoyable narrative, but really brings across its message of how the rich and poor are often at different ends of the spectrum.
Whether you are a huge fan of the film or not, the set contains extensive features that covers pretty much everything behind-the-scenes that you could ask for and are very interesting and informative. The set is in my opinion worth it for the features alone, and there are a lot of them. As I have never watched the original Blu-ray/DVD release of the film, I have no idea if they are exclusive to the new release, but it’s likely a good chunk of them are.

If you already own the film, I do feel it’s also worth it for the Ultra HD version to see the movie in 4K. The graphics are crisp and beautiful, and it really helps make the world of Elysium seem more real. I highly recommend the movie.