SciFi Vision | Reviews | Game & App Reviews | Doctor Who: The Edge of Reality is a Fun & Creepy Treat for Fans

Doctor Who: The Edge of Reality is a Fun & Creepy Treat for Fans

Doctor Who: The Edge of Reality is advertised as an expansion to the original VR game Doctor Who: The Edge of Time. That game was available on virtual headsets, including Oculus, on which I originally played part of. The VR aspect I admit does make the game more immersive. It also makes the creatures seem more eerie when they can jump out at you. I, however, get motion sickness so I was never able to make it super far in the original game, so I was really excited when I heard the game was coming to other platforms. The game is still not super long, clocking in at about two to three hours, but with the $24.99 price tag, it’s well worth it. There is also a deluxe edition on some platforms which includes multiples sonic screwdrivers and different gloves. I, however, received the standard edition for review. If they ever have the bonuses available as DLC, I will be buying it.

The game starts out with the Thirteenth Doctor (Jodie Whittaker) calling you for help in stopping the threat known as the Reality Virus, which has put all of time and space at risk, and you become her new companion. You start by investigating a London-based laundromat for clues, which eventually leads you to her TARDIS and other planets, where you help her find the Time Crystals and stop the villain known as The First.

The acting voices, sound effects, and music really make you feel like you are on the show, and it’s fun to get to wield a sonic screwdriver. Getting to not only enter and look around the TARDIS but hit buttons and levers was really thrilling as a fan. I do wish, however, that you could venture beyond the area around the console. 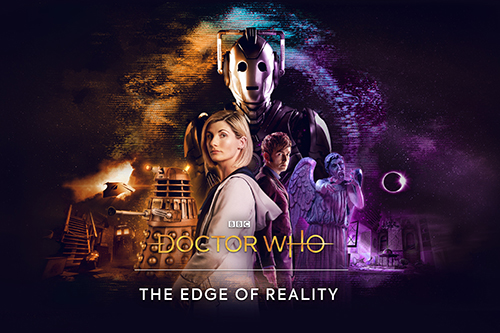 The game features some of the best adversaries from the series, including Weeping Angels, Daleks, and Cybermen, as well as some new additions, such as the frightening CyberReaper. The environment and atmosphere add to the feel of the game, and it can be downright creepy at times (those Weeping Angels freak me out!) Having David Tennant reprise his role as the Tenth Doctor was also a real treat. Fans of the show, like myself, will definitely enjoy all the bits and references. There are also items that you can pick up along the way that are Easter eggs of the series for diehard fans to collect, such as the Fourth Doctor’s scarf for example. I would tell you more of them, but I don’t want to give away all the surprises!

As for the game aspect, the puzzles I felt were pleasant without being too difficult. This is definitely by no means an action game, however, I did like the puzzles. Some were easier than others, but nothing was so difficult that I couldn’t power through it. There are also audio clues sometimes if you get stuck. The only problem I really ran into was getting caught by the Cyberman in the one section, which became frustrating for a while.

Now for the negatives. I would still buy this game, but it does have its issues. I wouldn’t consider myself a hard-core gamer (although maybe a hard-core Whovian), but the graphics are only average, and I found the controls themselves horrible and hard to get used to at first, the chief problem being there was no option to invert the y-axis. However, this issue was addressed in the most recent update! Still, I find it difficult to move around. I’m also not a fan of first person, as a personal preference, but I feel like usually you can move easier. A lot of this game is about looking around and moving closer and it feels like a leftover from the VR version, because the movements are just not intuitive for a console game, at least I didn’t find them to be. There are also no instructions, and I found myself figuring things out by trial and error. Some kind of tutorial round would have been helpful. Switching from the sonic to a flashlight you have to do often, and it took me probably halfway through the game before I realized you could hit one button instead of going into the inventory. Note that after the last update there is now an option in the menu to see what the buttons do, which is extremely helpful and I wish had been there from the beginning. 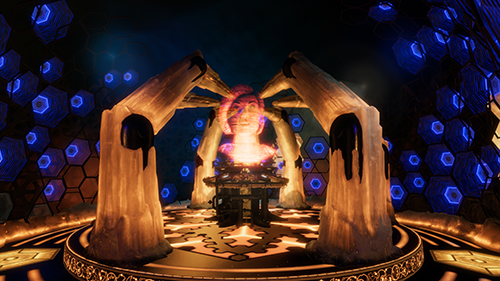 I am a completist and picked up everything I could find. Unfortunately, the inventory is also hard to use. When you pick up things it constantly pops up a contextual button help telling you to look at your journal, which has nothing to do with what you are carrying. Each item you want to examine you have to reopen the inventory and look at it (although you can rotate it and after trial and error I discovered zoom as well) and then drop it or your inventory is full after a few items. It’s really annoying with everything you can pick up to keep having to remember to drop things. Also, holding and rotating every item again seems like a left-over action from the VR game, and since most of the items are irrelevant, it’s a waste of time to look at every item close - especially because they are very low resolution and blurry (and a lot of duplication). I feel like you are supposed to want to look at things like the book titles for more little inside jokes, but most things are just hard to read. It’s a shame, because I want to find all those little references. I spotted for example a Coal Hill poster amid the others on the wall, which I appreciated. If you don’t care about those things, it wouldn’t be a huge detriment, except for the fact you actually have to look through items for clues in certain places. In one area you need to find a number code, and I had to actually get up off the couch to read a handwritten note on an object that gave me the answer (this was the only instance). Also, again, since the movement seems to have been made for VR, it’s hard to get at certain angles like looking in filing cabinets. I also found the controls made me dizzy at times, so if you are prone to it, watch out for that.

There are, as expected, also some bugs. Neither Doctor appeared on the television screen, and certain places audio cues were missing. In one instance I only figured it out because I had turned on the captions. In another area you have to use books in a certain order, and after trying a few times the books didn’t reappear and I had to restart the chapter. Most of the other bugs, such as the screen being too dark was fixed with patches (there’s now an option to change the brightness in the main menu). Since I have passed those parts, I’m not sure whether those I mentioned were addressed by the update or not. 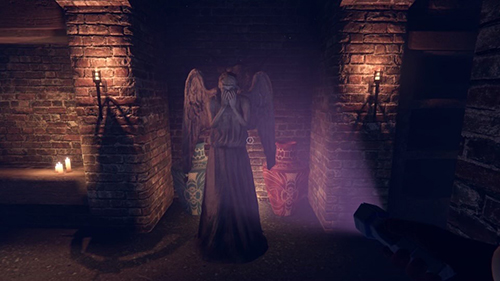 The main thing I have to mention is since starting this review, I have been unable to continue my game since I saved it at the Cybermen level – I’m not sure if it’s something wrong with the menu system or if the save file became corrupted (I read this was a bug). If it’s the file that was corrupted, this may have been fixed in the update. I am currently in discussion with tech support to figure out the issue and will update this review once I have found a suitable solution.

All that all being said, the game is definitely worth playing despite its flaws. The creators have been quick to offer patches and there are more on the way. This gives me faith that my issue will be fixed, and even if it turns out the file was corrupted, I liked the game enough I’m willing to start over to make it through to the end.

It’s a entertaining puzzle game, with a decent story, and If you are a Whovian, you will get a kick out of Doctor Who: The Edge of Reality. The game is now available digitally on PlayStation, Xbox, and PC, with a Switch release on October 28th.
Twitter
BotonSocial por: SocialEmpresa
Category: Game Reviews