On June 12th, Syfy premieres the new original space opera, Dark Matter, which is based on the Dark Horse Comics' graphic novel by the same name, by Joseph Mallozzi and Paul Mullie, who serve as executive producers on the series. The show focuses on the crew of a derelict spacecraft who awaken from stasis with no memory of who they are, where they are, or why they are there. The six crew members, along with the ship's android, must work together to find answers.

The well-written script draws you in, but along with the drama and action, it also contains moments of humor to keep it light. I greatly enjoyed the mystery element in the pilot and the surprises along the way, and can tell from the first episode that the story is one that has staying power, and the characters can be taken a lot of interesting places. 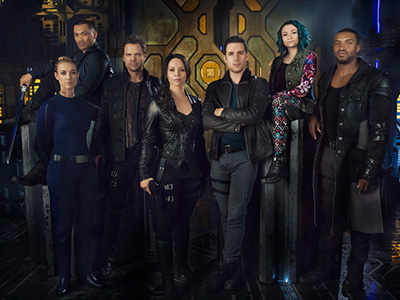 It was fun watching as the crew was forced to work together and to try to trust each other to figure out what's going on, as well as seeing their discoveries of their skills that are already ingrained in them. Although much is not known about their backstory, they each bring a unique skill set that will likely become a vital part of their true mission, whatever that may be. You still can get a feel for who they will potentially become. I'm also curious to see how the Android (Zoie Palmer) meshes with the crew as the series moves on.

The characters all have great personalities and the cast was well chosen. Science fiction fans will recognize many of the actors, all of which fit their parts really well, and each brings something to the table. They all have their own secrets and mysteries that it will be fun to unravel along with them. 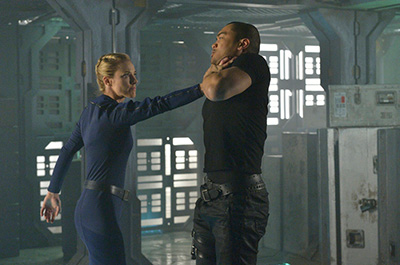 The crew, with nicknames, consists of One/Pretty Boy (Marc Bendavid), who seems to be the moral compass, trying to steer everyone in the right direction, Two/Boss Lady (Melissa O'Neil), who organically becomes the leader of the group, Three/Sunshine (Anthony Lemke), the smartass, who seems to be out for himself, Four/Slashy McStabberson (Alex Mallari Jr.), the stoic sword master who doesn't say much, Five/Kid (Jodelle Ferland), the young mysterious mechanic, who seems to retain some strange memories or visions, and Six/Tiny (Roger Cross), an imposing man, but he seems to have his head on straight. There is also of course the Android, who has a sense of humor and a personality of her own.

The ragtag group has excellent dynamics and interactions and I'm really interested in seeing how they shift as they get to know each other more. 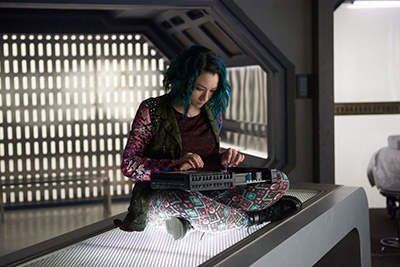 The massive set of the ship is beautiful as was the overall look of the show. You can tell that care and attention were given to detail, including off-world.

I'm really excited to see where the story takes the crew as they continue on their journey. It's going to be a fun and kick-ass ride.
Twitter
BotonSocial por: SocialEmpresa
Category: TV Reviews & Recaps