Sharknado: The 4th Awakens to Premiere on Syfy 7/31

Published: Friday, 01 April 2016 12:56 | Written by SciFi Vision
SYFY AND THE ASYLUM ANNOUNCE THE TITLE AND AIRDATE WE’VE ALL BEEN WAITING FOR:

SHARKNADO: THE 4TH AWAKENS TO PREMIERE ON SYFY ON SUNDAY, JULY 31

WESTLAKE VILLAGE, CA – April 1, 2016 – Syfy and The Asylum today revealed that the official title of the next SHARKNADO movie is…SHARKNADO: THE 4TH AWAKENS! The two hour original movie will premiere four months from now on a TV very, very nearby – on Syfy, Sunday, July 31 at 8PM ET/PT.

The fourth installment of the SHARKNADO franchise will take place five years after the East Coast was ravaged in last summer’s SHARKNADO 3: OH HELL NO!. Fin (Ian Ziering), his family and the cosmos have been blissfully sharknado-free in the intervening years, but now sharks – and ‘nados! – are being whipped up in places (and ways) least expected. 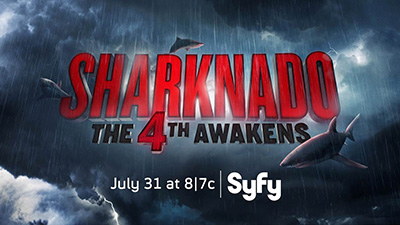 Tara Reid is also set to return as April Wexler to reveal the outcome of the fan-voted #AprilLives or #AprilDies social campaign. David Hasselhoff (as Gil Shepard) and Ryan Newman (as Claudia Shepard) will also reprise their SHARKNADO 3 roles. New additions to the SHARKNADO: THE 4TH AWAKENS cast include Gary Busey, Tommy Davidson, Imani Hakim, Cody Linley, Masiela Lusha and Cheryl Tiegs (with more to be announced soon!).

SHARKNADO: THE 4TH AWAKENS is a production of The Asylum. Anthony C. Ferrante returns to direct an original screenplay written by Thunder Levin.

About The Asylum
The Asylum is one of the world's leading brand-oriented motion picture and television studios. With a focus on high-concept, market-driven entertainment, like the SHARKNADO franchise and the popular Z NATION television series, The Asylum finances, produces and releases 25 films per year through its direct pipeline to the nation's top retailers and its network of international partners. Since its founding in 1997, The Asylum has released more than 500 films and has built a library of over 200 original productions, including top-rated movie premieres for Syfy, Lifetime, and Animal Planet networks. In addition, The Asylum has begun production on Season 3 on one of Syfy's highest-rated shows, Z NATION, a critically-acclaimed action-horror series.

About Syfy
Syfy is a media destination for imagination-based entertainment. With year round acclaimed original series, events, blockbuster movies, classic science fiction and fantasy programming, a dynamic Web site (www.Syfy.com), and a portfolio of adjacent business (Syfy Ventures), Syfy is a passport to limitless possibilities. Originally launched in 1992 as SCI FI Channel, and currently in 96 million homes, Syfy is a network of NBCUniversal, one of the world's leading media and entertainment companies.  NBCUniversal is a subsidiary of Comcast Corporation.  (Syfy. Imagine Greater.)
Twitter
BotonSocial por: SocialEmpresa
Category: TV News