SciFi Vision | All Reviews | Television Reviews | We are the Strongest Thing Together - The Walking Dead 11x24, Rest in Peace - Review

We are the Strongest Thing Together - The Walking Dead 11x24, Rest in Peace - Review

“[Despite the upcoming spin-offs] it ends with a really definitive conclusion for both the series and then each individual character.”
--(Scott Gimple on the series finale, interview with Entertainment Weekly, 25 October 2022)

The first stories most Western children hear end with happily ever after, and that phrase settles into their subconscious as the model for what an ending should look like—an ending in life as much as in fiction. With maturity comes the understanding that happily ever after is as fantastic an element of those stories as are the dragons and fairies. Nonetheless, fiction, for adults as well as children, exists not only to reflect reality, but also to redress it. Stories hold up a mirror, and are, too, a window into somewhere else: a place not subject to the whims of fate, but controlled by storytellers. 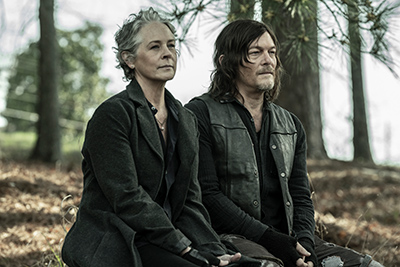 A show about the zombie apocalypse was never going to be sunshine and roses, and The Walking Dead managed its viewers’ expectations right from the start. Apocalyptic life is violent and ugly. People die frequently, and they do so in appalling ways. But the very horror that defines the show is also the means by which it redresses the more benign, but still difficult reality its viewers live. The Walking Dead is about the difference between monsters—whether zombies or people—and human beings. We can access our humanity, the show teaches us, even in the most inhumane of circumstances. The audience finds the cruelty of twenty-first century life mirrored in the series, but they also look into a more nightmarish alternative, where, inspiringly, people still manage to practice empathy, find love, be brave, and show mercy.

The series finale is jam-packed with moments of humanness, both heartbreaking and hopeful. Connie and her friends mourn Luke and Jules. Rosita sacrifices herself to save her daughter, and Eugene and Max name their baby after her. Justice is meted out to Pamela Milton as she is imprisoned, and a kind of mercy is bestowed on her by Maggie as she decides against shooting the governor. Via a time jump—a device badly overused in this final season of the show—the finale explores both the brutality of war and the rewards of peace. There are fighting and pyrotechnics, heroism in spades, and both visual and verbal callbacks to earlier seasons. The episode ends with a teasing look at the whereabouts of Rick and Michonne Grimes, an inclusion which is gratifying for fans anticipating their upcoming spinoff.

While there are extraordinary performances in this episode—by Christian Serratos, Melissa McBride, Norman Reedus, and Cailey Presley Fleming in particular—the cast’s full-bodied, open-hearted energy in the finale is undermined by a script that is flawed and at times incomprehensible in its narrative choices. As much as balance is achieved in places—Ezekiel gets a kingdom once more, Negan at last apologizes to Maggie for killing Glenn—overall, like the final season as a whole, the episode suffers from lopsidedness and overpopulation.

Showrunner Angela Kang has said in numerous interviews that the writers did their best to service everyone’s story and has acknowledged the impossibility of doing so satisfactorily. This could have been avoided by introducing fewer new characters in the course of the season, or at the very least centering fewer of them in the narrative. A show infamous for shocking deaths, in which no character has ever been safe, became coy about killing people off in the last season—except all of Oceanside, of course, and Luke and Jules, minor characters brought back onto the screen to serve solely as cannon fodder.

Still, at its conclusion, the series gives almost all of its multitude of characters a “definitive [if somewhat hurried] ending”—partners, homes, children, vocations in the new world for which they have fought. Open ends are closed: Negan and Daryl offer each other a grudging respect; Rosita gets to say a beautiful, moving farewell to her family. The only characters who do not get the ending they deserve—the ending they have earned over eleven seasons—are Carol and Daryl.

During the final months of filming, the spinoff starring Melissa McBride and Norman Reedus lost Carol and became a solo show for Daryl. Rewrites were necessary, and the planned ending for those two characters, which saw them ride out West together, was changed. In the version that made the finale, the two confess their love for one another, and then Daryl leaves, while Carol remains behind doing Lance Hornsby’s old job. Their verbal exchange is brief, and thus the season concludes without these two having had a single long, profound conversation with each other.

There is too much to say about the dynamics of this scene, its raw, understated power—as well as the show’s lazy, decade-long reliance on subtext in this particular relationship—to fit into a review. What must be addressed, however, is that the grief of watching these characters part as the series ends is entirely unassuaged by the narrative itself. It is unclear why Daryl is departing. Perhaps he is exploring as per Maggie’s vague suggestion, or perhaps he is patrolling the borders. Looking for Rick and Michonne seems to be a potential side quest, as Daryl tells Judith that if he happens to see anything “while [he’s] out there”, he’ll follow the trail. Whatever his mission, the audience is expected to believe that it is significant enough for him to leave Carol—with whom he has repeatedly said he wants to run away—and the children whom he has spent years raising, yet not significant enough to be articulated. Carol goes so far as to tell him their separation will be “good” for them both, which is nonsensical. They have spent years fighting for this exact moment: to be together, at peace, comfortable in their skins.

And so, the only two original characters left on The Walking Dead are also the only two who do not receive a “definitive ending”, or closure, or the happiness Judith encourages Daryl to pursue, her eyes fixed on Carol as she speaks. Instead, Carol sacrifices her own contentment for the umpteenth time in the series, while Daryl’s decision is distressingly, bewilderingly out of character. Perhaps that is why the writers did not try to produce adequate justification for the heartbreak of this scene: there is none, at least not within the story told since 2010.

Fiction, for adults as much as children, exists not only to reflect reality, but to improve it. To some extent, though rushed and uneven, The Walking Dead’s series finale achieves that. In the case of its longest-standing characters, however, the show seems to have written an ending explicable only with reference to events outside of the story itself—namely, the solo Reedus spinoff going ahead without McBride. This is a significant failure, and a painful one for the audience invested in those characters’ stories, an audience that has already experienced the loss of the original spinoff. Whatever their future may or may not hold, the ending Carol and Daryl get in the main series—tearful, reluctant separation—offers little to comfort or uplift the viewers. Instead, the writers have allowed a reality in which money and logistics rule to dictate a fictional ending for two characters who deserved far, far better.
Twitter
BotonSocial por: SocialEmpresa
Category: TV Reviews & Recaps