Last Monday, the first season of American Song Contest came to a close with the announcement of the winner of the competition, AleXa, representative of Oklahoma, for her song “Wonderland.”

According to AleXa, who spoke with SciFi Vision recently, the song is a metaphor. “It’s basically kind of a metaphor for when you break free of that fantasy whenever someone is leading you on, and you're viewing them through these rose-tinted glasses, but then you realize, ‘Oh, no way; you're deceiving me. It's not healthy for me; let me escape it.’ So, we kind of wanted to represent that through the ropes that we use on stage as breaking free of things. But then also metaphorically, as we all know, [in] the story of Alice in Wonderland, the White Rabbit leads her through her journey of Wonderland, all these challenges and everything.” 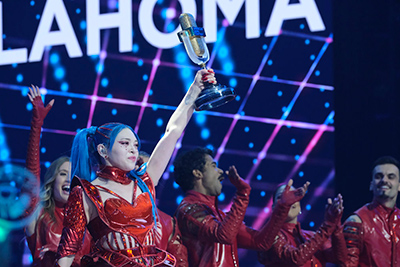 The singer added that she also used it to pay homage to the people in Oklahoma who made her who she is today. “They are my white rabbit that are leading me through my personal Wonderland,” said the performer.

AleXa was genuinely surprised when they announced she was the winner. “As the jury votes were going,” she explained, “my staff and I, my parents and I, [we] were just standing hand in hand just huddled and hoping and praying for the best and just seeing how things are playing out. We were just worried, and then seeing that monumental amount of votes come in from all the fans and the voters, my heart just soared. Typically, when people say their heart drops to their stomach, it's in a negative connotation. But my heart dropped to my stomach in the best way. I just felt so relieved in that moment.”

“It was such an honored, just gratifying moment to be in,” AleXa added. “I'm never going to forget last night.”

The competition may have just ended, but the star already has plans moving forward. “I have some little fan events coming up here and there, and also, there are some more plans to hopefully possibly see fans face to face even more these next coming months, but we will see what happens.”

“For those people who are not familiar with me,” added the singer, “my overall concept as an artist is like AI multiverse. So, which chapter of the AleXa verse, if you will, will we pick up on next? Who's to say, but there are definitely some exciting things coming happening.”

Fore more, be sure to watch the full interview below!

Exclusive: For All Mankind's Wrenn Schmidt on What's Next for Margo
Wednesday, 15 June 2022

The Wilds Season Two Shines, but not Quite as Bright
Monday, 02 May 2022