Becoming Elizabeth, which recently premiered on Starz, tells the story of young Elizabeth Tudor (Alicia von Rittberg), before she rose to the throne. Although the story of the queen is well known, this is something new, according to actor Tom Cullen, who plays the character of Thomas Seymour. “[T]o be honest,” the actor told SciFi Vision, “this is a part of the history that I didn't know anything about, really, and I can't believe it. There's so much out there about Elizabeth, the first one of the most iconic characters in history, but nothing really about this period in her life, which I think is so informative as the person that she became. It was a real honor to kind of get into that and get a chance to tell that part of her story.” 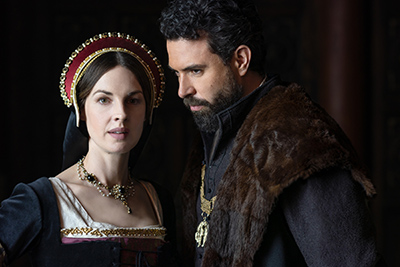 Working on a historical project like this could be daunting, but Cullen looked to the script. “I read a lot, as much as possible,” said the actor. “There's not a huge amount on Thomas Seymour, to be honest, but Anya’s scripts were just so so brilliant, so complex, so nuanced, that those really were the launching pad. I just wanted to do her writing and her interpretation of Thomas justice. So, yeah, lots of research, but it just kind of sits and vibrates in you, but actually, the real meat is definitely the brilliant script.”

It was similar for actress Jessica Raine, who plays the part of King Henry VIII’s widow and Seymour’s wife, Catherine Parr. “I guess, I read around it a lot, and I think, to be honest, loads of it came from Anya [Reiss]’s script,” the actress told the site. “She was so clever and detailed and how she wrote these characters, every single one of them is really three dimensional. It's just so exciting playing someone where the stakes are so high, I guess. So, you've got to kind of balance it out with your research and sort of living in the moment, I guess.”

For more, including working with such elaborate costumes on the series, watch the full interview below, and be sure to check out the series on Starz.

The Wilds Season Two Shines, but not Quite as Bright
Monday, 02 May 2022