Recently, on Transplant, Dr. Bashir “Bash” Hamed, played by Hamza Haq, made a decision that resulted in a patient’s father, Ray Grisholm (David Eisner), filing a lawsuit against York Memorial Hospital. Grisholm’s legal team discovered that Dr. Bishop (John Hannah) does not have Bash’s original credentials from Syria and lied about talking to the dean of his school. They plan to use it against the hospital to win the case.

According to Haq, who spoke with SciFi Vision on Tuesday in an exclusive interview, although Bash doesn’t feel guilty for the choice, it does still affect the decisions he now makes. “I think Bashir can compartmentalize on that level, where he's just like, ‘I did the best that I could. I absolutely did the best that I could,’ ” said the actor. “He doesn't feel any guilt or feel shame about that, but I think he empathizes so deeply with people's circumstances that to know that something that he did affected someone's life so greatly, I think he just feels it as opposed to feeling guilty for it.

“...[T]his other superior, medical, authoritative figure in Dr. Grisholm, him coming by, exacerbates his anxiety and his tension and his need to save lives and do his best, that I think all of those manifest in not so much guilt, but in his desire to make things right...I think it does inform his decisions and his hesitations in future procedures. Like, I think there's a moment with June (Aisha Issa) and Theo (Jim Watson) where they come in, and they want to do some cowboy sort of scenario, but because it isn't by the book and protocol, I think he just hesitates a bit, because he just doesn't want to be on the hook again, and [have] somebody else getting involved, again, based on a decision that he makes.” 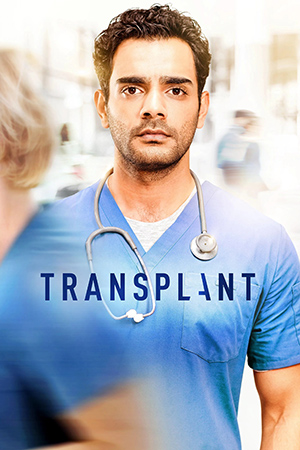 Bash is ready to take the fall for what happened, not wanting Dr. Bishop to bear any responsibility, but is he thinking through what could potentially happen if he takes on all the repercussions himself and how it could not only affect him, but his sister, Amira (Sirena Gulamgaus), as well? “I think he just doesn't want other people to suffer as a result of his decisions,” the actor told the site. “In the beginning of the episode, he even says that [he’ll] be the one to take the hit for it. If somebody has been lying for [his] benefit, it just doesn't sit well with him.

“I think in terms of Amira and everything like that,” Haq added, “I think his desire to take care of her will always be there. He says to Khaled (Fayçal Azzouz), and it's a beautiful line, ‘If there's one thing I know, it's how to survive.’ So, I don't think he's too worried about about what he'll do after, because he'll make it work...What he can't reconcile is somebody else taking the hit for him.”

One of the patients in the season finale is criticized for not living her life. Is Bash too self-sacrificing? Should he be living more for himself, or is he doing the right thing? “I think he's trying to find a way to make the most of the opportunity that he's given, but his conditioning is such that he has to throw himself in the line of fire,” said Haq. “I think there's still the survivor's guilt that we see not only with his PTSD in season two, but [also] having lost his parents and stuff, but I think the way that it starts to affect how people see him and how he sees himself, he needs to start living for himself and be a little bit selfish. It isn’t until he starts doing that, that he's going to actually be the best brother or the best doctor and everything like that. Self-actualization and self-help, those are the things people spend their entire lives on, and I think that'll be a constant journey throughout Bashir’s life, and people will be affected by that, depending on where he is in that journey.”

The actor continued that Bash’s biggest flaw is that he doesn't exercise self-love. “He puts a lot of pressure on himself to be this model image of what a human being is, so when his flaws or when any of that peeks out, he spirals and wants to make sure that everything is contained.”

With all of the negatives to have come this season, there could be some potential for positive. Could it bring Bash and Mags (Laurence Leboeuf) closer? “Both characters have been through so much…There's an opportunity for them to explore each other in a way that they haven't had before, and we do see that in a capacity moving forward, and their relationship does change quite a bit [from] what we've seen,” the actor teased.

For more from Haq, including how the PTSD affects Bash's abilities to do his job, what he would most like to see happen for his character, and more, be sure to watch the full video interview below, and don’t forget to watch the season finale of Transplant, tonight on NBC.