Opening in theaters in Los Angeles and New York today and nationally on November 5th, Violet, written and directed by Justine Bateman, follows the title character played by Olivia Munn. Violet spends her days making fear-based decisions by listening to self-criticisms and self-doubts (voiced by Justin Theroux) and misses out on the things she wants in life rather than living free like her friend Red (Luke Bracey). It isn’t until Violet realizes she has to ignore the lies she tells herself and face her fears head on that she can do things differently and live the professional, personal, and romantic life that she really wants.

According to Bateman, who talked to Jamie Ruby of SciFi Vision in an exclusive interview, she named the characters Violet and Red, because they represent opposites, although she didn’t realize it when she first wrote it. “When you look at the light spectrum, the visual light spectrum for humans, you've got red on one end and purple on the other…Red’s the polar opposite, as far as how he lives his life. So, she has to go across the spectrum to get to where she needs to by the end.” 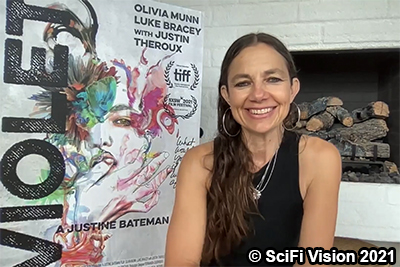 It was hard for her to put into words what she was looking for in the performers she chose, but she knew it when she saw it. “There're certain kinds of characteristics or a feel or a vibe that I need for each one of the characters. Then, when I look at video of the of the actors, you know, their work, their interviews, their social media videos, I can see those characteristics or components. Maybe they're obvious; maybe they're subtle. I know the subtle ones I can tease out and expand.”

Bateman was younger when she realized she was not being her true self and making a lot of fear-based decisions and needed to change to live that free life, and that’s what led to her creating the film. “I had to experiment; I had to not do that and see if the worst-case scenario actually occurred…Then, when you do it in a small way, it gives you the strength to do it in bigger situations. Then, what I would find was like, wow, either the worst-case scenario doesn't happen at all, or the worst case scenario does happen, but because it happens, something magnificent happens on the other side that I couldn't have seen unless the worst case scenario occurred. I guess I made fear-based decisions for a long time before I realized I was doing them…Once I realized that you actually [could] get from someone who's making fear-based decisions to someone who's making instinct-based decisions…once I realized you could cross that bridge, I was all in. Then, once I got to the other side, then I felt pissed that that fear had stolen time from me. So, that's why I made the movie so that other people can maybe not have that time stolen from them.”

The writer has a piece of advice for others trying to drown out their self-doubting voice. “I think just to recognize that they're lies and then ask yourself, ‘What irrational fear do I have that is serving as an anchor for that fear? Why am I buying into it?’ And not rhetorically asking, but really [asking]; that's what helps me. Then I'll write it out, or I'll talk about it with a friend, and I'll get to what the irrational fear is...Writing it out, or saying it out loud, somehow exposes it to the elements, and it'll start to disintegrate. It won't have the same hold on you…as it could have in the future.”

For the rest, please check out the full interview below and be sure to watch the film, Violet, which is also available On Demand November 9th.