The film Fall from Lionsgate, which was recently released in theaters,tells the story of best friends Becky (Grace Caroline Currey) and Hunter (Virginia Gardner) who are stranded after climbing to the top of an abandoned two-thousand-foot radio tower.

The idea for the film, according to director and co-writer Scott Mann, who spoke to SciFi Vision in an exclusive interview, came from a fear of heights. “Myself and cowriter Johnathan [Frank] were actually on a shoot on top of a football (ie soccer) stadium of all places for a film we were shooting in London,” said the director, referencing his film that is now on Netflix, Final Score. “I remember, we were just aware of being on this small space at a real height with a sheer drop, and just the kind of fear of that, and how there's something in that more than just a gag or a stunt. I mean, it felt like there was more to be had, with this fear of heights or fear of falling thing…I do think there is an inner kind of fear in all of us about height. It's a very universal fear that we have. So, it was trying to use that as the core of the whole film and build a whole film around it and really use that to its maximum kind of different tones, the different palette of fun you could have. So, that was what it started at. I guess that and the combination of wanting to do something that really used film theater for what it's supposed to be used for and really kind of stand out in that environment and immerse you in that environment. So, that kind of fed through it too.” Mann added that they wanted the experience to feel more like a theme park ride. 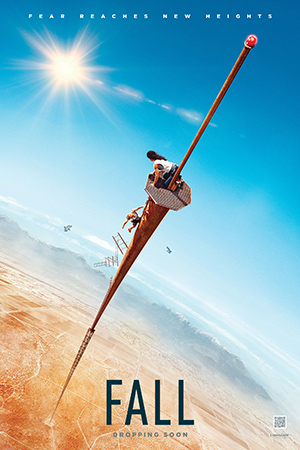 The film revolves almost entirely around the two main characters, and the director talked a bit about the challenges of keeping up the pace and tension in the film. “I think there's a couple of challenges that you set yourself,” said Mann, “which is like, ‘Okay, let's have two people stuck in this environment, and how the hell do they get out?’ It's like write yourself into a corner, and then you really think as if your life depends on it how you get out of there, and then in doing that, I think, it kind of unfolds that actually, yeah, we can do various different things, and [it's] kind of the formation of, or the creation of, working out what happens in the movie. You've got the general central tension, but then each kind of mini goal to get through and survive, and everything that you think to do is to kind of ratchet that tension and turn that screw a little bit at a time, so that by the end of it, you are horribly tense.”

Viewers might assume that the actresses on the tower were actually filmed against a green screen on a film stage, but that was not the case. “They're totally up high, and it's for real,” explained Mann. “That's why it looks that way. It's not special effects. Basically, we looked at different ways to make the movie…but ultimately, we realized it was either going to be a $100 million movie that's going to work all its resource to make it look real in that environment, or we take a much smaller team, and we go on this expedition to find a place to film this so we can actually film it at two-thousand feet. That became the mission of the movie, and that became kind of the core element of the movie…What we ended up finding was this huge mountain in the middle of the desert that had this big steep cliff drop off. So, we were up at the crazy height of thousands of feet. Then, we got the tower guys who actually built the real tower in Arizona to build us sections of the tower, in particular the top, for about one hundred feet up at the edge of the cliff. Then, we were able to film everything for real. The only times when it kind of dips into a split of stuff that isn't there is when you start catching the mountain. For that part we went to the desert and filmed that height and kind of stitched that element in.”

Mann explained that the wind and the weather really fed into the shoot as well. “We had a protocol which was [for] wind over certain a height,” the director told the site. “Obviously, all this is engineered and calculated and everything, but there was a whole thing with the wind where if it goes past, I think, twenty or thirty miles an hour, the actors couldn't be up there. If it goes past thirty or forty, the stunt people can't be up there. If it goes to fifty, you have to clear off the mountain. If it goes above fifty, you have to hide in this one little brick building in case it comes down. The first day we were up there filming, we had these winds just crank right up [and] the techno crane got blown off. So, we had this whole thing where everyone had to kind of run off and one of the stages got blown off and blown away. It reminds you there is a risk, and it was pretty terrifying and different.”

For more about filming the movie at such a height, how they worked with a real vulture at times, and more, watch the full interview below, and be sure to see Fall, now in theaters.