The third and final film in the Jurassic World trilogy, and the sixth in the overall Jurassic Park franchise, the film picks up four years after the events of Jurassic World: Fallen Kingdom where dinosaurs freely roam the earth, living among humans. The story follows Owen Grady (Chris Pratt) and Claire Dearing (Bryce Dallas Howard), who now are secretly raising Maisie Lockwood (Isabella Sermon), the clone/daughter of Charlotte Lockwood (daughter of John Hammond’s partner Benjamin Lockwood) as their own daughter in a cabin in the Sierra Nevada Mountains, keeping her safe from all that would want to exploit her. When mercenaries capture her and Velociraptor Blue’s baby, Claire and Owen must work to save her.

Meanwhile in Texas, Dr. Ellie Sattler (Laura Dern), from the original film franchise, has been tracking swarms of giant locusts that are wreaking havoc on crops, putting the food supply of the entire country in danger. Discovering that the company Biosyn is involved, she brings in Dr. Alan Grant (Sam Neill) to help her infiltrate the sanctuary to find proof. They enlist help of Dr. Ian Malcolm (Jeff Goldblum), who now works for Biosyn, rounding out the trio from the original films’ cast. 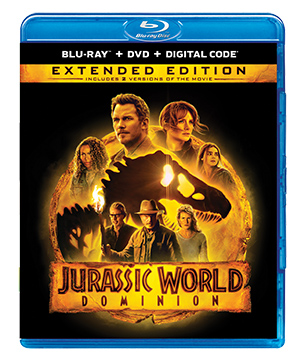 Eventually the two stories merge, culminating in a thrilling adventure that fans of the franchise will love.

As expected, the film is exciting and full of action and also had some great moments of levity. Although it’s the sixth installment and not the best of the bunch story-wise, I still found the film enjoyable.

The special effects, as always, were impressive and really pulled you into the movie.

I especially liked how they brought together the casts from both sets of films and found a way to make it work. There were some other cast members from the previous films that showed up besides the trio, so if you are a fan of the franchise, it’s a lot of fun; however, if you are new to the story, you can still easily understand and appreciate the movie.

All in all, I found Jurassic World Dominion to be solid addition to the franchise.

Extended Version of the Film [2:40:40] – The extended version features fourteen minutes of added footage. I liked this cut better and think that the extra scenes do add to the film.

Battle at Big Rock [10:17] – This a short film directed by Colin Trevorrow that takes place a year after the events of the previous film. The story follows all new characters whose vacation is cut short when dinosaurs enter their RV camp.

A New Breed of VFX [6:16] – This feature is the cast and crew talking about the visual effects used in the film. Includes interviews and behind-the-scenes footage.

Dinosaurs Among Us: Inside Jurassic World Dominion – This set of five featurettes is extensive and includes both interviews with the cast and crew and behind-the-scenes footage.

* Together for the First Time [5:26] – The cast and crew talk about the characters from both sets of films.

* Underground Dino Market [4:59] – The cast and crew talk about the set used for the scene, practical effects, fight training and choreography, and more.

* Mayhem in Malta [4:32] – The cast and crew talk about the chase scene through Malta.

* Final Night [6:52] – The cast and crew talk together about working on the franchises before they wrap.

Jurassic World Dominion, although not the best in the franchise, it was still entertaining and a fun way to bring both ends of the franchise together. If you are fan of the franchise, you will likely enjoy the film, but if you are new, you should still have a good time. Including both the extended edition as well as many making of features, the disc set is definitely worth a purchase, in my opinion.
Twitter
BotonSocial por: SocialEmpresa
Category: Interviews